Hawks Land at US Congress

The control of the lower house of the American parliament, the Congress, could fall into the hands of Republican hawks. The Democrats who currently have the majority in Congress think that this is possible. 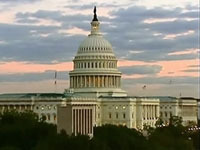 Hawks Land at US Congress

In particular, such an assumption was expressed by the representatives of this party, namely, Obama’s spokesman Robert Gibbs, who gave an interview to U.S. television networks. This can happen in the fall of this year, when parliamentary elections will be held in the country.

According to him, such a scenario may occur if the Democrats do not prepare properly for the campaign.

If the hawks win the majority in the parliament, it will considerably weaken the position of the current president Barack Obama. The Republicans oppose the implementation of many of the proposed solutions, both in foreign and domestic policy.

The situation is exacerbated by sharp decline in Obama’s approval ratings. Judging by the latest opinion polls, most Americans do not intend to vote for him in the next presidential election in 2012.

There are many reasons for this, the main one being the continuing financial crisis, which Washington is not able to fix at the moment. As a consequence, the current American authorities fail to cope with rising unemployment and achieve positive changes in the economy.

Last year, Washington has allocated nearly a trillion dollars to fight off the crisis. However, the situation has not been reversed as of yet.

In addition, increasingly more Americans oppose the White House policy in the Middle East and Afghanistan.

Finally, the last factor that caused Obama's rating to drop further is the environmental catastrophe in the Gulf of Mexico.

Republicans strongly criticize Obama for signing of a new treaty on strategic offensive armaments. They believe that it does not properly reflect the national interests of the United States.

If the current President fails to persuade lawmakers to approve this agreement, then in future it will be even more difficult, especially if the Democrats lose their positions in Congress to the Republicans.

In addition, the seizure of control in Congress by the Republicans could lead to a tougher U.S. foreign policy, as the Republican Party traditionally has the policy of strengthening Washington's influence in the world.

It is significant that, according to a poll conducted by experts of the New York Siena College that deals with political themes in the U.S., the current head of state takes only the 15-th line in the ranking of the best presidents in the history of the United States. It is not the best indicator by the American standards. Experts suggest that the credibility of Obama in the future will be decreasing because he was not able to solve the key problems of the country.

Meanwhile, Obama himself does not dramatize the situation. He describes his work as head of state as an “exclusive privilege” and is satisfied with his current rating. He said it was an extraordinary privilege to wake up every day early in the morning and know that you serve the American people and you have the opportunity to make life better. He believes that considering the situation his rating is normal.

And if the Republicans win the fall election, the Democrats will have to make remarkable efforts to stay in power. It is possible that Obama would not even run for the second term. To save the situation, the leadership of the Democratic Party may nominate another candidate who does not have the disadvantages that Obama has.