On Tuesday in Washington U.S. President Barack Obama and Israeli Prime Minister Benjamin Netanyahu had their first conversation in the last few months. 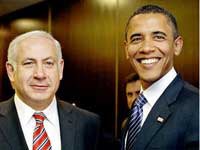 In recent months, there were talks about the US-Israeli relations undergoing a serious crisis. This was due to the fact that the Israelis were very unhappy with Obama's proposal to put hold on the construction of Jewish settlements on Palestinian territories. However, the Americans had their own arguments. Their goal is the resumption of Palestinian-Israeli negotiations. The Palestinians have firmly refused to engage in any dialogue while the construction of the settlements continues.

Under U.S. pressure, in November of last year, Israel announced a 10-month hold on construction of Jewish settlements on the West Bank of the Jordan River. However, American diplomats have failed to persuade the Palestinians to return to the negotiating table. They insisted not on suspending but the complete cessation of the construction. But Israel is not ready for it. Moreover, on July 6, the head of the Israeli Foreign Ministry made it clear that the 10-month moratorium will not be extended. It is unlikely that his words aroused enthusiasm in Washington.

Russia Today: Netanyahu and Obama make up in Washington meeting

In turn, Israel has also accumulated a great deal of complaints for the U.S. President. For example, during his presidency, Obama repeatedly expressed the need to strengthen relations with Muslim countries. Recently, the U.S. administration decided not to support the actions of Israel which forcefully prevented attempts of Gaza ships from “Fleets of Freedom,” organized in Turkey, from entering the port. Neither did the United States side with the Israeli in the Israeli-Turkish diplomatic conflict.

Negotiations between Obama and Netanyahu were almost overshadowed by another unpleasant incident. Last night the information was released that American Airlines lost four suitcases belonging to the guards of the Israeli prime minister. According to preliminary data, it happened during transportation of the luggage from New York's Kennedy Airport to Washington.

The suitcases soon surfaced on the other side of the U.S., in Los Angeles. However, the check revealed that four guns that belonged to Netanyahu’s guards were missing. It is suspected that the weapons were stolen. Once information about the disappearance of the guns reached Washington, already stringent security measures around the White House, where the negotiations took place, were further enhanced.

A press conference was held after the negotiations. The addresses of the two politicians stressed the fact that the rumors about a crisis in US-Israeli relations were greatly exaggerated.

According to Barack Obama, the ties between the U.S. and Israel are unbreakable. The U.S. leader stressed that in the statements of the Prime Minister of Israel, who is considered a “hawk,” he saw the desire for peace and willingness to resume direct Israeli-Palestinian negotiations as soon as possible. Obama also welcomed the recent decision by Israel to soften the blockade of the Gaza Strip.

The American President assured that his country fully recognized Israel's right to defend itself. “The U.S. will never ask Israel to take risks that would undermine its security,” Obama said.

In addition, the U.S. President said that he was convinced that the Palestinian Authorities have done considerable work to stop terrorist attacks against Israel, and urged Israelis to appreciate this step taken by Mahmoud Abbas administration.

In his turn, Netanyahu said that the two countries will continue to closely cooperate in the promotion of the peace process in the Middle East. He strongly welcomed the introduction of new sanctions against Iran by the UN Security Council. Netanyahu said that rumors about the deteriorating of relations between Israel and the U.S. were exaggerated. He invited Obama to visit his country on an official visit.

In addition, Netanyahu made it clear that he expects the administration of Mahmula Abbas to take new steps forward. First of all, the Palestinian side must stop anti-Israeli propaganda and prosecution of Israel through the international courts. Obama agreed with this approach.

At the same time, the two leaders did not touch upon the subject of continuing or suspending the construction of the settlements at the press conference. Some media outlets reported that Obama and Netanyahu “reached an understanding” on the issue. However, it is unclear what it meant exactly and whether Israel has agreed to extend the moratorium on the construction of the settlements.

The American president and Israeli Prime Minister strongly expressed the need to resume direct Israeli-Palestinian dialogue. However, Palestinians are still not ready for that. Mahmoud Abbas said that first they had to have some progress in indirect talks mediated by the United States and other interested parties. And only then there could be talks about a direct dialogue.

Perhaps the relationship between the U.S. and Israel after the talks between Obama and Netanyahu will improve. However, the prospects for Israeli-Palestinian dialogue remain murky. The Palestinian Authority has not received a response yet regarding willingness of Israel to suspend the settlement construction. Arabs do not seem to be willing to negotiate directly without it. Thus, the question of whether we can consider the outcome of negotiations in Washington t successful is still in the air.