The authorities of the United States and Pakistan refused to conform the rumors about the capture of Taliban movement leader Mohammad Omar, aka Mullah Omar. A US blogger, who posts under the screen name Bred, posted a message on the Internet saying that Mullah Omar had been arrested in Pakistan. 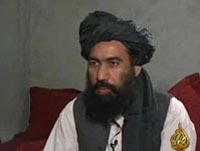 Servicemen of US special forces operating in Afghanistan and Pakistan informed US military intelligence about Omar’s detention in Pakistan’s Karachi at the end of March, the blogger said.

Mullah Omar, the founder of the Taliban and its leader, is one of the most secluded political figures. He never communicates with the media, nor does he give any direct interviews. His rare audio messages appear on the Internet.

Those few people, who met Omar in person, say that the Taliban leader produces quite an impression. They describe him as a man of stature with scarred face and a very long black beard. He wears a black turban and does not have one eye, which he lost during the USSR’s invasion of Afghanistan.

Omar acquired distinction during the war with the USSR. He founded the Taliban movement in the beginning of the 1990s and still remains its leader. The goal of the Taliban was to retrieve law and order in Afghanistan, which had found itself in chaos after the pull out of Soviet troops from the country.

The Taliban regime was toppled in Afghanistan after the 9/11 terrorist attacks. Omar disappeared. In 2002 it became known that the Taliban leader did not want to move from his native town of Kandahar until the last moment. His former driver told Newsweek magazine that Mullah Omar found shelter in the mountains of Pakistan.

The US blogger said that he had obtained the information from the US Department of Homeland Security, although it is obvious that a web surfer can refer to anything.

The “breaking news” from blogger Bred appeared at the time when Pakistani special services discuss the delivery of Talib No.2 to Kabul with their Afghan colleagues.

Talib No. 2, Mullah Abdul Ghani Baradar, was arrested as a result of a special operation conducted by the CIA in February 2010 in Karachi. However, the news of his capture did not receive publicity.

US special serves were hoping to obtain valuable intelligence information from Baradar, including the information about Omar’s whereabouts. For the time being, it is not known whether Baradar has revealed anything to the CIA.

Afghan President Hamid Karzai is seeking an opportunity to reconcile with the Taliban. He has recently asked the UN Security Council to remove several Taliban officials from the black list of terrorists.

The UN’s black list currently counts 137 names. Five names were struck out of the list in the beginning of the year. Now the former members of the Taliban participate in the work of the Afghan parliament or act as mediators at the talks between the Taliban and governmental forces.

Karzai asked the Security Council to strike out the names of those Talibs, who were not related to al-Qaeda. It is technically possible to distinguish good and bad terrorists, although it can be extremely dangerous too.

“Rehabilitation of Taliban terrorists would mean that all of their activities are legal. When Karzai says that Mullah Omar should be rehabilitated, he pursues political goals in an attempt to strengthen his political positions in Afghanistan and show foreign military men that he is an independent politician,” an expert with the Voice of Russia said.

Will Talib No. 2 be demonstratively amnestied in case he is delivered to Kabul? Karzai had repeatedly offered Taliban officials seats in the government of Afghanistan, although Mullah Omar rejected such offers.

If the rumors about Omar’s arrest are conformed, it could mark a crucial point in the Afghan war. Most likely, the rumors are not true. It just seems strange that they appeared in this particular time period to coincide with other important events.