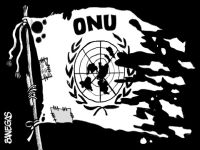 The UN is a powerless impotent entity that has only served to defend American interests and this is noticed by the consequences that result from the arrogant actions of the United States and its proteges when not disciplined by any international mechanism of containment.

The agreement between Brazil / Turkey / Iran by all appearances indicate that it left American Secretary of State, Mrs. Hillary Clinton, without any further legitimacy. She was discredited before the world, which may have been unpleasant for her, but which brings some benefits for many. The course of events has demonstrated, beyond all expectations, for the whole world to observe, calmly and in Technicolor, the true U.S. motives in relation to Iran.

The reason is not complicated. It is to get their hands on Iranian oil and at the same time make the military industrial complex happy. I say that the problem is simple because they are specialists, with many, many years and many, many wars on their list of merits.

Even if you don't care much for mathematics, it is entirely possible to admit that the specified numbers speak for themselves. We may add that besides oil reserves we can also consider the problem from another point of view, which is the gas companies and oil industry-and their the worldwide energy sector. These companies are those of Saudi Arabia and Iran, which are followed by those of Qatar, Iraq and Venezuela.

Remembering that 65% of oil and gas reserves worldwide are in the Middle East and that the poor unfortunate people of the United States have only 2% (two percent) of the world's oil reserves and the de-facto situation where they have managed to get involved through financial institutions on Wall Street in a desperate financial situation we will specify.

The official U.S. debt in the credit market is 90% of American GDP. Joining it are the debts of the industrial-corporate sector, as well as from private individuals there is a specified a debt of 360% of GDP of the country. Without running the risk of slander no one can affirm that it is bankrupt.

Now, what is the UN good for? To impose "sanctions" on Iran for not lying on their back while the U.S. prepares to take ownership of their oil at gunpoint? The UN did not serve for anything with the immoral and illegal war against Iraq, the war also had as its main objective to guarantee Iraq's oil to Western hegemony. That time it was the oil of Iraq and it is now about Iran's oil. With a good memory we remember that back in 2000 it was specified in the United States that by 2010, they would need six Saudi Arabias to secure the coveted oil for the consumption of such a hegemony.

If the interest is not oil but territory for their godchildren, we have the history of the U.S. veto in the UN Security Council. To a layman it can be seen that from 1967 until today, 90% of the resolutions submitted by the General Assembly on Israel did not materialize because of the power of the veto of the United States, and it would not be very wrong. Specifically we have:

From 1948 to 2009, there were 223 resolutions presented at the UN Security Council with respect to Israel, in which the United States put its veto of all the really important resolutions, namely: -

Condemned the policy of installing settlements in Israeli occupied territories. Condemned the action of Israel in southern Lebanon. Deplored the repressive measures taken by Israel against the Arab population. Condemned Israeli practices against civilians in southern Lebanon. Calling on Israel to respect Islamic holy places. Insist that Israel respect the fourth Geneva Convention, canceling the order for deportation of Palestinians. Condemn practices violating the human rights of Palestinians. Deplore the continued lack of consideration of relevant decisions by the UN in regard to Israel. Comply with international demands and stop the building of Israeli facilities in east Jerusalem. Accept the international invitation to put UN observers in the occupied territories. Condemn the murder of several employees, as well as the destruction of the warehouse of the UN Food Program. Condemn Israel for killing Ahmed Yassin. Calling on Israel to end to the assault on Gaza.

All vetoed by the United States.

Resolution 1701 called for a full cessation of hostilities in the war between Israel and Hizbollah, mapping out a formula for the phased withdrawal of the Israel Defence Forces from southern Lebanon, while up to 15,000 United Nations peacekeepers were to help Lebanese troops take control of the area.

The resolution emphasized the need for an end of violence, but at the same time emphasized the need to urgently address the causes that gave rise to the crisis, including the unconditional release of the abducted Israeli soldiers. "Mindful of the sensitivity of the issue of prisoners", the text also encourages the efforts aimed at urgently settling the issue of the Lebanese prisoners detained in Israel.

The system of how the UN Security Council works bothers me. In my opinion, beyond anything specified above we still have this last story with the application of sanctions against Iran. Having the agreement with Iran that was signed by Brazil and Turkey makes everything that has followed just an arrogant demonstration. Here we are calling the shots and ready. Everyone will see who we are. Yeah, really. Really. Thank God the whole world will see.

Right. It is an insult and a consciously developed insult by the U.S. and sent to Turkey and Brazil. But as the whole world could observe closely, not everyone in the world are declared idiots, the consequences to expect from this latest demonstration of incompetence and arrogance will be simply the case of the spell turned against the magician. Just wait and see. The more they do the better, because they themselves on their own are preparing the ground where they will get bogged down once and for all. God forgive me if you want them to choke on all the Iranian oil.

As regards the UN, if it is to meet expected, appropriate objectives, it has to renew its way of working. One thing is certain. The UN Security Council must be restructured in such a way that reflects the realities of 2010 rather than 1945. The system of veto ... Well, there are no appropriate words to even be found. It's a shame it has to be excluded and forgotten. If somehow it continues going to the cabinet of the horrors of history, and despite the shame that you can feel, the lesson learned is not forgotten so soon.

*Anna Malm is a correspondent of Latin Homeland in Stockholm, Sweden.