The USA celebrated its 234th anniversary on July 4th. Millions of US passport holders annually celebrate this date even though they are not full-fledged US citizens. It goes about the natives of Puerto Rico, an island in the Caribbean Sea. The Puerto Ricans do not enjoy the right to vote for the president and the congressmen. 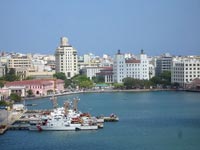 No one lobbies Puerto Ricans’ interests in the government, in the House of Representatives and in the Senate (two congressmen with a right of consultative vote do not count). The choice made by 4.5 million US-based Puerto Ricans could exert a serious influence on the situation in US politics.

It is all about the status of Puerto Rico. Only the residents of 50 states have the right to elect the president and congressmen. The Caribbean island is not one of them. The status of the nation is defined as Commonwealth, or an allied state, a self-governing, unincorporated territory of the United States.

Puerto Rico was discovered by Christopher Columbus in 1493. Before 1898 it was a Spanish colony until the nation went under the US leadership as a result of the US-Spanish war. The territory is located in the strategically important area of the Caribbean Sea. It was extremely important for the United States to have it under control. The US still has large air bases on the island.

The Spanish legacy has not vanished, though. The majority of Puerto Ricans speak Spanish – this is the official language (together with English) on the island.

In 1952 the United States created the Constitution of Puerto Rico. The Constitution says that the residents of this nation do not hold the right to participate in US national elections. In return, the Puerto Ricans are relieved of federal taxes and receive 10-billion-dollar annual help from the federal budget. This is a huge amount for the territory, where the level of income is twice as low as that in the USA.

The population of Puerto Rico can elect their national governor and the parliament. They can not make any decisions in the field of defense, security, foreign politics and finance. These are the prerogatives of federal agencies only.

Not all Puerto Ricans enjoy their status of second best citizens. They tried to establish their own independent nation and even arranged a national mutiny in 1950. The peak of the mutiny was an attempt to assassinate US President Harry Truman. The rebellion was suppressed and never repeated again.

It is worthy of note that Puerto Rico has held a number of independence referendums, but all of them ended with negative results. According to the results of the most recent one, held in 1993, 48 percent of Puerto Ricans said that the status of their nation should be left as it was, 46 percent said they wanted their country to be turned into the 51st state of the United States. Only four percent said that they would like Puerto Rico to become an independent country.

The status of the unincorporated territory gives Puerto Ricans a number of advantages. They do not need to have a visa to enter the US territory. No one will consider a Puerto Rican an illegal immigrant. Over 2 million Puerto Ricans have moved to the United States for permanent residency. Many of them reside in New York and Miami.

The USA is not willing to change anything about the status of the Caribbean nation either. On the one hand, it keeps the strategically important island under control. On the other hand, Puerto Rico is not a state of the United States, which gives Washington an opportunity to save cash on the development of this poor territory. In addition, many Americans are concerned about a possibility for Spanish to become a serious competition for English. The complete annexation of Puerto Rica could play a negative role in this process.

However, both the USA and Puerto Rico acknowledge that the current status is not the final solution to the issue. A committee for Puerto Rico established during bill Clinton’s stay at power recommended the US Congress in 2000 should give the islanders a right for self-determination. Nothing has been decided on the matter yet.

The USA will never refuse from Puerto Rico. The geographic position of the island gives the USA the advantage over Cuba, Venezuela and other adversaries in the region. If the USA makes Puerto Rico its state, the Americans will have to take a lot of efforts to raise the living standard in the impoverished nation. There is no point in doing that, but there is every chance to keep and control the small Caribbean territory.