The Senate Armed Services Committee held hearings about the appointment of General David Petraeus as the head of US forces in Afghanistan instead of General Stanley McChrystal, whose extensive military career ended abruptly as a result of a scandal. 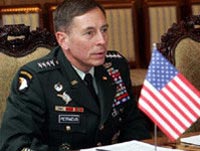 Petraeus is not the first American general, who will lead coalition forces in Afghanistan. Most likely, he is not going to be the last one in the never-ending Afghan campaign, which has become the longest war in US history.

From Wikipedia: “Petraeus graduated from West Point in 1974. He earned the General George C. Marshall Award as the top graduate of the U.S. Army Command and General Staff College Class of 1983 at Fort Leavenworth, Kansas. He subsequently earned an M.P.A. in 1985 and a Ph.D. in international relations in 1987 from Princeton University's Woodrow Wilson School of Public and International Affairs, then served as an Assistant Professor of International Relations at the U.S. Military Academy from 1985 to 1987. His doctoral dissertation, "The American Military and the Lessons of Vietnam: A Study of Military Influence and the Use of Force in the Post-Vietnam Era," dealt with the influence of the Vietnam War on military thinking regarding the use of force.”

We do not know which lessons Petraeus has learned from Vietnam. He did not take part in the war, because he graduated from West Poiunt in 1974, when US troops were disgracefully leaving Vietnam.

His experience includes many other local wars, in which the USA tried to establish the new world order, more or less successively. During the second half of the 1990s, David Petraeus took part in two campaigns in Haiti (1995) and then in Kuwait (1999). In 2001-2001 he participated in the peacemaking operation in Bosnia and Herzegovina.

When the USA launched the military invasion of Iraq in March 2003, Petraeus was commanding the 101st Airborne Division. In July 2003, Petraeus’s soldiers detected and killed Saddam Hussein’s sons – Uday and Qusay.

The 101st Airborne Division left Iraq in the beginning of 2004, having lost over 60 soldiers in the country.

Will General Petraeus be able to achieve any success in strengthening Afghan armed forced within a year before the USA starts to withdraw its troops from the war-torn nation?

Barack Obama decided that the troops would begin to leave Afghanistan in July 2011. However, he added that process would depend on the situation. Petraeus pointed that out for members of the Senate committee. He also said that American military men would have to do a lot in Afghanistan before the national security forces were able to keep the situation under control single-handedly.

"There has been tough fighting and tough casualties ... but we are determined to achieve progress in coming months," Petraeus said.

This is quite an eloquent statement. According to Petraeus, NATO troops will be opening fire against the enemy much more frequently.

"In counterinsurgency, the human terrain is the decisive terrain, and you must do everything possible to reduce civilian casualties ... in the course of military operations," he said.

McChrystal was criticized for limiting the use of force in the interests of the local civilian population. Petraeus stated that he was morally obliged to use all possible means to defend US and Afghan troops.

It brings up the idea that the number of casualties in Afghanistan will skyrocket, whereas the positions of Talib fighters will only strengthen.

In the meantime, an independent investigation showed that the USA misjudged the possibilities of Afghan security forces and their ability to maintain law and order in the country. The report by Special Inspector General for Afghanistan Reconstruction Arnold Fields said that the USA’s knowledge of the condition and abilities of Afghan police and army was superficial.

The publication of the report will raise even more questions on the Capitol Hills. The Americans have already spent about $27 billion on training of Afghan security forces. This is almost 50% of the funds, which the US administration assigned for the restoration of Afghanistan. No success has been achieved whatsoever.

David Petraeus is not going to experience great times in his brilliant career. He is not likely to become the general who will change the course of the hopeless war. Quite on the contrary, he has all chances to earn the reputation of another whipping boy.