There was a change of power in Australia. For the first time a woman (Julia Gillard) became the nation's Prime Minister. She managed to win against Kevin Rudd, the person who was regarded as perhaps the most popular head of government in the history of the country. 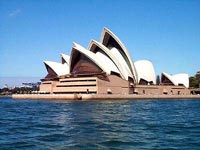 The election of Gillard took place at the meeting of the parliamentary faction of the ruling Labor Party. Under Australian law, the head of the majority party automatically becomes prime minister. In the coming days Gillard will be sworn in and will formally head the Cabinet.

The change of government in Australia was a surprise to many. The position of Laborite Kevin Rudd who headed the office three years ago was considered fairly strong. During his time in office the Green Continent managed to avoid the influence of the global economic crisis which seemed to have affected everyone.

Rudd was failed by the ecological issue. In February of this year he refused to consider the bill suggesting introduction of quotas on the emission of greenhouse gases for large enterprises.

Australia, like the U.S., after signing the Kyoto Protocol decided not to undertake the reduction of harmful emissions into the atmosphere and the introduction of national quotas for greenhouse gases until 2013. The government was under the assumption that the country should fight against global warming not by reduction of emissions, but through the introduction of new environmentally friendly technologies.

Yet, many citizens were not happy with the fact that the administration followed the example of the Americans. The ruling Labor Party gave life to the bill, which still imposed quotas on emissions. When Prime Minister Rudd refused to support it, many of his colleagues saw it as an act of political cowardice.

Then a new portion of accusations was brought on by the Labor Party. They said the Prime Minister was too arrogant with his closest people. Finally, the proposal to introduce a very high tax on profits of mining companies was the last nail in the coffin of the super popular Head of Cabinet. The bill would have adversely affect the economy of Western Australia and Queensland, where mining is the most important industry.

In addition to environmental issues and tax on mining companies, the electorate had another problem with Rudd, this time regarding foreign policy issues. Polls showed that over 60 per cent of Australians wanted an expedited withdrawal of their troops from Afghanistan, counting 1.5 thousand people. However, the Government has made it clear that this process could take anywhere from two to four years, until the Australian military fulfilled its mission of proper training of Afghan soldiers.

Problems with Rudd had been accumulating, and along with his personal ratings, the level of support of his Labor Party was going down as well. At the end of the year parliamentary elections will be held in Australia. Rudd had to urgently seek a replacement. It was found in the person of the Deputy Prime Minister Julia Gillard.

On June 24, the parliamentary faction held an election of its new leader. Rudd, realizing he had lost the confidence and support of his colleagues, chose not to nominate himself. Therefore Gillard won without struggle. Now she will lead the country for at least six months (before the election).

This was a landmark event. Not only because Gillard is the first female prime minister. She is the first Prime Minister of Australia born outside of the country. Julia was born in Wales, but at age of five she immigrated to the green continent with her parents.

In Australia, Gillard managed to build a very successful career. In 1998 she was elected to the Parliament from the Labor Party. Eight years later, she became deputy head of the Labor Party, and in 2007 she became the Deputy Prime Minister. She managed to win against Rudd, taking advantage of his mistakes.

Yet, it is not clear whether there will be radical changes in current policies. Local experts, for example, suggest that is unlikely that Gillard will expedite the withdrawal of Australian troops from Afghanistan. At least, she made no such promises. However, the quotas on greenhouse gas emissions will likely be introduced, although no exact date was mentioned.

Until now, Australia fully supported the U.S. policy. It supported the war in Afghanistan and Iraq, and refused to fight global warming through the introduction of emissions quotas. Polls showed the majority of citizens do not support this course. And now the first female prime minister will have to choose between continuing the course of Washington support that had proven successful over the years, and listening to the opinion of her fellow citizens.