Obama Gradually Slides into Snake Pit that He Digs for Himself

Recent opinion polls conducted in the Untied States have showed that the sitting president of the nation is not likely to be reelected. The majority of the polled Americans said that they would not like to see Barack Obama in the office again, after his current presidency draws to an end in 2012. 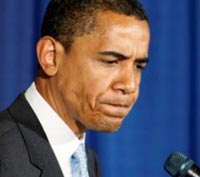 Obama Gradually Slides into Snake Pit that He Digs for Himself

American electors are known for their conservative views, and Obama will have to take titanic efforts to retrieve his rating. Why did he lose all of his charm and people’s support in just two years?

For a start, one has to acknowledge that Obama has never enjoyed the national support. It was enough for him to make just one serious mistake to shatter his reputation, which is exactly what we see today.

He had to work under very difficult conditions. As a matter of fact, Barack Obama’s election coincided with the beginning of the global economic crisis. The USA is still there, despite optimistic statements. Even if it takes years to recover from such a serious crisis as this one, most people do not care a bit about it. They want their life to get better now, not tomorrow.

Obama’s achievements in foreign politics are humble too. One has to take account of his predecessor’s legacy, of course. George W. Bush’s presidency was particularly marked with the establishment of the Guantanamo prison. Many criticized the USA claiming that the “most democratic nation in the world” openly violates human rights, humiliates and tortures prisoners. Obama promised to close the prison during his campaign, although he has not been able to succeed at this point.

One has to acknowledge another thing: America is still bogged down in the endless war in Afghanistan. Even the improvement of the situation in Iraq, where the number of terrorist acts has reduced considerably in comparison with previous years, has not become a consolation for electors.

It bring up the idea that Obama’s rating will continue to decline taking into consideration the complicated state of both home and internal affairs of the United States. For example, it is obvious to all now that the solution to the Iranian nuclear program has not been found.

Does Obama have any chances to be reelected? If not, who can become his successor? Pavel Zolotarev, deputy director of the Institute for the USA and Canada, said in an interview with Pravda.Ru that Obama and Democrats on the whole find themselves in a difficult situation at present moment.

“I believe that the administration of the Democratic Party will nominate another candidacy for its own rescue. The political system of the United States is very conservative, which gives the nation a very good protection in critical situations. This is the main reason why the Americans do not want to see Obama in the White House anymore.

“The efforts, which the sitting president has been taking in home and foreign politics, meet the resistance of this system. The conservatism of the system stipulates power, stability and the absence of flexibility.

“For Russia, Obama’s defeat at the next election would be a piece of bad news. His political course meets Russia’s interests. However, it raises concerns with Republicans. That is why the Congress has not ratified the START Treaty still. The infamous Jackson-Vanik of 1974 amendment is still in effect.

“If all these current trends continue, A Republican candidate like John McCain has all chances to win the next vote. I would not be too dramatic here, though. Moscow and Washington will never return to the cold war, like it was during the existence of the Soviet Union,” Pavel Zolotarev concluded.