The Grand Primiere of British Premier

David Cameron, 43-year-old British prime minister, became one of the most noticeable "novices" in big politics this year. He did not have enough time to do much after his appointment on May 11. Yet, his previous career is impressive, and his lifestyle indicates he is an outstanding person, capable of bringing a great deal of new things to the international politics. 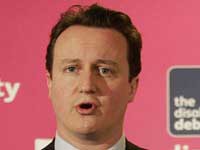 The Grand Primiere of British Premier

Cameron has little resemblance to the representatives of the Conservative Party. He enjoys riding his bicycle, listening to rock music, and does not mind cooking. His sports interests are limited to soccer and tennis. These ordinary hobbies of the Conservative leader that people can emphasize with have added a great deal of votes in the elections on May 6.

In general, Cameron is a traditional representative of this political force. The new British Prime Minister advocates minimal government involvement with the economy and lower taxes. In foreign policy he criticizes Russia and the EU, which is also characteristic of "Tories."

David William Donald Cameron was born on October 9, 1966 in the family of a stockbroker and a magistrate. His parents seem quite unremarkable. Yet, there is one huge "but". The father of the current prime minister originated from King William IV and his mistress Dorothy Jordan who lived in the18th century. This means that Elizabeth II appointed her distant relative the prime minister.

Cameron’s childhood and adolescence were typical for an aristocrat. He received his primary education in Heatherdown Preparatory School at Winkfield, which counted Queen’s sons Prince Edward and Andrew as alumni. Then he studied at the prestigious private Eton College. Finally, in 1988, he graduated with honors from Oxford University, where he studied politics and economics.

Cameron joined the Conservative Party as a teenager. Prior to Oxford he spent some time in the headquarters of Tory MP Tim Rathbone. Then he worked as a vessel agent in Hong Kong for a little while, but quickly returned to his homeland in 1984, in t ransit through the Soviet Union.

Young Cameron had the chance to see the USSR. He traveled to Yalta with his friend. To this day David likes telling the story about "two Russian ladies with excellent English” who approached him at the beach to ask questions about life in England. "We were very careful, but when I told about it to my college professor, he said it was for sure a recruitment attempt," Cameron said. It is unclear how the KGB could use this young man.

The imaginary recruitment attempt did not affect his career in any way. After graduation, Cameron started moving up the party ladder. He worked in the research department of the Conservative Party and as an advisor in the Ministry of Internal Affairs in the office of the conservative John Major. In 1994-2001 he quit his career as a "Tory" to work as Director of Corporate Affairs with Carlton Communications TV company. This did not last long.

Back in 1997, Cameron was running for the House of Commons from the Conservatives, but was unsuccessful. He reached hi s goal only four years later.

In 2005, the Tories lost the parliamentary elections, and their leader Michael Howard has resigned. It became clear that the party needed a new face to win the election. This new face was the young Cameron who was not even forty at the time.

In many ways, a successful marriage contributed to the rapid career advancement of this politician. In 1996, he married Samantha Sheffield, whose ancestors were King Charles II and his mistress Nell Gwyn. The current prime minister has strengthened his aristocratic status with his marriage.

The couple has two children, with the third one expected in the fall. A crying baby has become a good tradition in the residence of the prime ministers in Downing Street. Tony Baer also had a baby when he was prime minister.

The new British prime minister is a supporter of an active government role in social policy. Meanwhile, the usual image of the Conservatives is characterized by tireless efforts to reduce social spending, hence the nickname "the party of the rich."

In his campaign speeches, Cameron said that to revive the economy he would have to cut taxes in order to give businesses greater freedom of action. He also advocated the tightening of immigration policy and spoke against the transfer of too much power to the EU. Cameron has often repeated that if he had been in power, he would never have ratified the main document of the EU, Lisbon Treaty. The British, who are known for their Euro-skepticism, liked his program.

Cameron is not particularly fond of Russia. After the war in South Ossetia, he deliberately visited Georgia where he met with Mikhail Saakashvili. He called to punish Russia, and to prohibit its oligarchs from flying to London for shopping.

It is not obvious yet what internal and external policies the aristocrat will stick to. His "international premiere” will take place in Canada on June 25-27, where he will participate in the summit of the G8 and G20. There is no doubt that Cameron will receive a great deal of attention there.