Russian President Dmitry Medvedev ordered Aleksey Miller, the chairman of Gazprom’s administration, to cut the supplies of natural gas to Belarus proportionally to the nation’s debt volume to Russia. Gazprom will be restricting the shipment of gas to Belarus on a daily basis in accordance with the nation’s debt for gas consumption, Interfax reports. 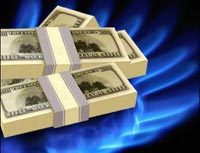 “Belarus acknowledges its debt for natural gas, but offers to pay it with vehicles, equipment and other goods, Miller told Medvedev. The talks with the Belarusian administration have not led to any positive outcome of the crisis, the official added.

Medvedev stressed out that foreign payments could be accepted only in foreign currency.

“Gazprom can not accept other forms of payment for the debt – we can not take cakes, butter, cheese or other means of payment instead,” Medvedev said.

Russia Today: The use of wasted gas could save billions

The head of state offered to continue the talks having claimed that “Gazprom would most likely have to make some decisions.”

The president ordered to launch the adequate procedure and maintain cooperation with Belarus to give them an incentive to execute the terms of the contract, Pravda.Ru reports.

The talks between Russia and Belarus took place in Moscow in the morning of June 21. Russia evaluates Belarus's gas debt at $200 million.

Gazprom previously said that it was hoping that Beltransgaz (the gas company of Belarus) would repay the debt before June 21. The Russian gas monopoly sent another letter to Belarus on June 17 urging the country to execute the contract and repay the debt.

“We warned Belarus that Gazprom would have to restrict its deliveries of natural gas to Beltransgaz in case the latter does not take adequate actions. The restrictions would be conducted in accordance with Paragraph 6.4 of the Contract of December 31, 2006,” Aleksey Miller said.

Belarus stated in response to Moscow’s requirements that the debtor was not Beltransgaz, but Gazprom, which did not pay $200 million to Belarus for the transit of the Russian crude.

On Saturday, the talks between Aleksey Miller and the Minister for Energy of Belarus Alexander Ozerets ended without any result.

“The talks ended with nothing. We finished, I don’t know where they went afterwards,” Miller said.

The chairman of Gazprom later said in an interview with Russia 24 TV channel that Belarus offered Russia to repay its debt to Russia with goods, not money.