The ecological disaster in the Gulf of Mexico made US President Barack Obama appear in a televised address to the nation for the first time during his presidency. Usually, American presidents resort to this form of communication with their people in case of war or a state of emergency. A sex scandal is also possible, “thank you for watching.” 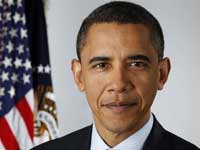 Obama compared the oil spill disaster with 9/11 terrorist attacks, which gave the USA the reason to invade Afghanistan. It is obvious now that overcoming the terrible consequences of the oil spill has become a matter of paramount importance for America, just like the efforts to overcome the economic crisis and the struggle against al-Qaeda.

As for the financial crisis, one has to give the US administration credit for stabilizing the shattered bank system. The American economy has started growing. However, there is still a number of potential problems in the field which may affect the recovery and even lead to another setback in the industry. The catastrophe in the Gulf of Mexico exerted a highly negative influence on the energy sector which in its turn touches upon other segments of the American economy.

As for the war in Afghanistan – it seems now that it will never end. The state of political affairs in Iraq is a mess too. The US administration wants to finally defeat the Taliban movement, but this goal can hardly be achieved.

This two-headed monster (the economic crisis and the war) has grown its third head – the oil spill in the Gulf of Mexico. Everyone says that it has become the biggest ecological disaster that America has ever faced, and Obama is not an exception at this point.

“Already, this oil spill is the worst environmental disaster America has ever faced. And unlike an earthquake or a hurricane, it is not a single event that does its damage in a matter of minutes or days. The millions of gallons of oil that have spilled into the Gulf of Mexico are more like an epidemic, one that we will be fighting for months and even years,” Obama said.

“But make no mistake: we will fight this spill with everything we've got for as long it takes. We will make BP pay for the damage their company has caused. And we will do whatever's necessary to help the Gulf Coast and its people recover from this tragedy… And this fund will not be controlled by BP. In order to ensure that all legitimate claims are paid out in a fair and timely manner, the account must and will be administered by an independent, third party,” he continued.

The mentioning of “third party” is not incidental. In the course of the address, Obama touched upon the issue of corruption at the US Department of the Interior, which is in charge of environmental problems and particularly controls the issue of well drilling licenses.

“When Ken Salazar became my Secretary of the Interior, one of his very first acts was to clean up theworst of the corruption at this agency. But it's now clear that the problems there ran much deeper, and the pace of reform was just too slow. And so Secretary Salazar and I are bringing in new leadership at the agency - Michael Bromwich, who was a tough federal prosecutor and Inspector General. His charge over the next few months is to build an organization that acts as the oil industry's watchdog - not its partner,” he said.

Barack Obama has stressed out again that the USA must get rid of its dependence on hydrocarbon sources of energy.

“For decades, we have known the days of cheap and easily accessible oil were numbered. For decades, we have talked and talked about the need to end America's century-long addiction to fossil fuels. And for decades, we have failed to act with the sense of urgency that this challenge requires. Time and again, the path forward has been blocked - not only by oil industry lobbyists, but also by a lack of political courage and candor,” he stated.

Obama’s televised address to the nation sparked Republicans’ criticism. The party, which supports the shelf drilling and has a skeptical attitude to Obama’s ecological initiatives, harshly criticizes all of his steps which he takes in the current situation.

“Manipulating this tragic, national crisis for selfish political gain not only demonstrates President Obama’s inability to aptly lead our nation out of a disaster, but also reveals the appallingly arrogant political calculus of this White House. Exploiting the tragedy in the Gulf to try to ram through a devastating job-killing national energy tax is more of the same Chicago-style politics that has the President’s approval ratings plummeting to an all-time low. Instead of leveraging this crisis to manufacture knee-jerk political support for cap-and-trade energy taxes, President Obama should focus on providing the people of the Gulf with real and honest solutions to this horrible environmental disaster this Administration has been slow in waking up to,” Michael Steele, Republican National Committee Chairman said.

“I look forward to working with the president to find a bipartisan path to passing meaningful comprehensive clean-energy legislation this year,” Reid said in a prepared statement.

“This legislation can only be passed if Republicans decide to work with us and demonstrate that they share our serious commitment to building a 21st-century energy strategy for America,” he added.

Even the catastrophe in the Gulf of Mexico will not make the two parties shake hands. It is a matter of billions of petrodollars, the national economy is in dire need of hydrocarbon fuel, and the end of the economic recession is not near at all.