Alexander Lukashenko, the President of Belarus, was left without dinner during his work visit to Moscow on June 11. Lukashenko arrived in Moscow for official talks with President Dmitry Medvedev and then with Prime Minister Vladimir Putin. The leader of Belarus complained to Putin that Medvedev had not served him dinner and asked the prime minister to treat him some food. Putin did not listen to Lukashenko’s request, the Moskovsky Komsomolets newspaper wrote. 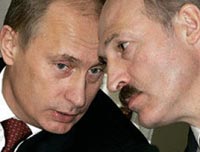 Putin: “Mr. Lukashenko, while you were having dinner with Mr. Medvedev, I managed to…

Lukashenko: “We didn’t eat anything.”

Lukashenko: “Having dinner? I came here and thought may you’d give me a piece of bread…”

Putin: “…I just had a good swim in the pool, and then went to the gym.”

Lukashenko: “I had a swim too, but that was prior to my meeting with Medvedev, but don’t distract me, you owe me dinner.”

Lukashenko: “Or don’t you eat so late?”

Putin: “I eat any time of the day and night.”

As a result, Lukashenko did not eat anything,

“They did not eat. They were discussing economic matters,” Putin’s press secretary Dmityr Peskov said. Putin did not give Lukashenko a piece of bread in spite of the fact that the talks started at about 10:30 p.m. and finished after 1:00 a.m.

Prior to the talks Medvedev told reporters that Russia was hoping for the establishment of the Customs Union with Belarus. The treaty between Russia, Belarus and Kazakhstan was signed in 2007. It came into effect on January 1, 2010. Before July 2010, the three member countries are supposed to ratify the documents necessary for the operation of the union.

On May 28, the prime ministers of Russia and Kazakhstan – Vladimir Putin and Karim Masimov – decided to put the Customs Code in effect without the participation of Belarus. The head of the Belarusian government – Sergey Sidorsky – refused to take part in the work of the session having claimed that his partners refused to take account of Belarus’s interests.

On June 3 Belarus’s Ministry for Foreign Affairs said that it was ready to join the Customs Union, and the code was submitted for ratification at the Belarusian parliament. However, Belarus intends to conduct additional talks for a number of reasons.

Officials of the Belarusian administration repeatedly stated that Minsk would approve the Customs Code if Moscow cancels export duties on oil. Moscow is not willing to meet such requirements. Dmitry Peskov stated that Russia’s attitude to the issue of export duties had not changed after Lukashenko’s visit to Moscow. The duty-free oil, which Belarus receives today, is enough to cover the needs of its home consumption, the official said.