The Shanghai Cooperation Organization is holding the second day of its annual summit in the city of Tashkent, the capital of Uzbekistan (a former Soviet republic), on June 11. In addition to the traditional agenda – the questions of the economic, investment cooperation and security – the members of the summit will discuss the situations in Afghanistan and Kyrgyzstan. 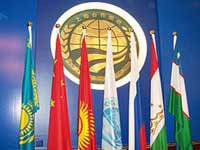 The list of the members of the organization, which currently consists of five former Soviet republics and China, may expand in the nearest future. It has been reported recently that Pakistan (150 million-strong population) and India (billion-strong) are willing to join the SCO. It sounds intriguing because both Pakistan and India are nuclear states. More importantly, the relations between these two countries have been intense for years – they often stand on the brink of war with each other.

Iran was also seeking the SCO membership. However, it became clear June 10 that it will not be allowed to receive it. Mahmoud Ahmadinejad is angry with Russia and China for their support of new sanctions against his nation. In addition, Russia and China insist that a sanctioned state does not have a right to join the SCO.

The organization originally appeared as a group of five states on June 15, 2001. The heads of five states gathered in China’s largest city to set up a regional organization to struggle against terrorism, separatism and extremist – the so-called three forces of evil. Uzbekistan joined the group the following year. The Charter of the organization was signed in June 2002 in St. Petersburg.

In 2006, the SCO said that struggling against international drug mafia as the financial support of terrorism would be one of its top priorities. In 2008, the organization announced its active participation in the solution of the Afghan problems.

That is why it is absolutely clear that the current meeting of the organization is devoted to the struggle against terrorism, extremism, organized crime and drug trafficking.

Special attention to the transnational trafficking of drugs from Afghanistan is very easy to understand. It is the basic source of instability, extremism, organized crime and terrorism in Uzbekistan’s Fergana Valley, in China’s Xinjiang Uyghur Autonomous Region, in the Caucasus and Kosovo.

Vladimir Putin said during his speech at the recent security summit in Turkey that the problem of production and trafficking of Afghan drugs developed from a regional problem into a highly relevant matter of international scale.

“Terrorist activities in the Northern Caucuses are based on the profit received from the sale of Afghan drugs. Kosovo has become a supplier of Afghan opiate drugs to European markets,” Viktor Ivanov, the head of the federal service against drug trafficking said.

The members of the summit will also approve regulations about the procedure to accept new members in the organization. The SCO currently takes the territory of three-fifths of the square of Eurasia (30 million km2). The citizens of SCO members represent a quarter of the planet’s population.