Residents of a small town of Bedford, Virginia, have found themselves in the center of a scandal related to the name of one of the most disputable politicians in history – Josef Stalin. 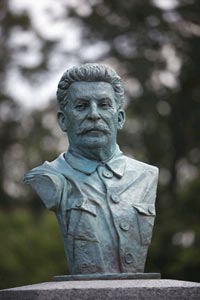 A memorial complex commemorated to the 66th anniversary since the landing of allied troops in Normandy (June 6, 1944) was unveiled in Bedford. The opening of the sculptural ensemble would have been regarded just as a local event if the busts of Roosevelt, Truman and Churchill had not been supplemented with the bust of Soviet leader Joseph Stalin.

Even Winston Churchill, one of the masterminds of the Cold War, could not deny the fact that Stalin was one of the key figures in the anti-Hitler coalition. Dozens of pages of Churchill’s epoch-making book “The Second World War” are devoted to the Soviet leader.

William McIntosh, the head of the foundation which organized the erection of the monument in Bedford, is certain that it was America that won WWII. Nevertheless, he believes that Stalin’s bust is a necessary addition since the Soviet Union was a member of the anti-fascist coalition. McIntosh said that the bust had been unveiled in recognition of Stalin’s role in the defeat of Nazi Germany, which contributed greatly to the operation in Normandy.

Annie Pollard, a Bedford County Supervisor who has volunteered at the memorial, said Wednesday it has been a source of controversy in Bedford and she feels its presence is "a slap in the face to all these other people we honor and remember."

"I just don't think it belongs on the hill with them," Pollard. "To me, he (Stalin) is just a murderer. I just can't see how he fits in with the memorial. They are people we want to remember. He's someone I'd rather forget,” she added.

James Morrison, a resident of Bedford shares the same opinion. It was a shameful event, an expression of disrespect to war veterans, the man said.

The Bedford veterans preferred not to express their views regarding the opening of the monument.

The funds for the monument were collected with the help of donations. It was impossible to either spend the funds on other goals or change the project, William McIntosh said. The sponsors were aware of the fact that they were funding the creation of the busts of Roosevelt, Truman, Churchill and Stalin. All of the sponsors knew that each bust would cost $50,000, but they were happy about everything.

The scandal with the sculpture of the Soviet leader in an American town is obviously a continuation of the discussion about Stalin’s role in world history. This discussion remains open for more than 50 years.

A similar scandal occurred in Ukraine on May 5, where Ukrainian communists unveiled Stalin’s monument despite nationalists’ protests.

Vladimir Litvin, the chairman of the Ukrainian Parliament, was strongly against the practice to immortalize those historical figures who provoke too much rejection among the population.

“A state and a nation can not exist without symbols and myths. However, they must be accepted by the majority of people. They must unite rather than split the society. Instead, we have a war of monuments against their political rivals. It will not lead to anything positive,” the official said.

It is worthy of note that Stalin did not pat himself on the back as far as future estimations of his persona were concerned. Here is what he said: “Many deeds of our party and the nation will be perverted and spit over, especially abroad and in our country too. My name will be slandered too, they will ascribe many atrocities to me.”

First monuments to Josef Vissarionovich Stalin appeared in the USSR in the beginning of the 1930s. Most of them were erected during the post-war years, when his persona was glorified as the father of all nations in the world. Many of those monuments were subsequently demolished after the 20th Congress of the Communist Party, which deflated Stalin’s personality cult in the Soviet Union and Eastern Europe.

The monument in Budapest was the first of Stalin’s monuments that was demolished in 1956. The monument to Stalin in Prague – the largest architectural composition in Europe – was exploded in 1962.

It goes without saying that even the total destruction of monuments to Stalin has not erased the memory about him. The appearance of Stalin’s bust in the US State of Virginia is a good example of it.