Russian border guards are seriously concerned about China’s actions on the Ussuri River. Chinese workers work to deepen the bottom on the river in violation of the border agreement between the governments of the Russian Federation and the People’s Republic of China. Russia sent a note of protest to China in November 2009, but China resumed the works in the border river in the spring of the current year. It just so happens that China ignored Russia’s official statements. 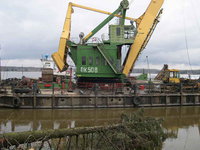 The dredging works in the Ussuri River do not pose any ecological danger. However, they can displace the river’s waterway, which goes along the border between Russia and China. The waterway can be displaced towards Russia meaning that China may obtain additional territory to Russia’s detriment, officials said.

Six Chinese barges with excavators and hydraulic pumps are now working in the area near four Russian settlements. The works violate the intergovernmental agreement about the Russian-Chinese border from November 9, 2006. Russia is currently collecting materials to file another note of protest to China, officials of Russia’s Khabarovsk region and the Jewish Autonomous Region said.

It seemed that the two countries settled the border dispute concerning the borders along the rivers of Amur and Ussuri two years ago. The dispute started a long time ago.

The world was on the brink of war in 1969 after USSR’s armed clashes with China on Damansky Island. It was rumored that Soviet troops attacked the Chinese military with volley fire systems and even used laser weapons in the actions. The border conflict developed into fierce battles with the use of tanks, artillery weapons and volley-fire systems. It took the lives of 60 Soviet border guards and up to 3,000 Chinese soldiers. Mao’s provocation nearly ended with a large-scale war between the two communist superpowers.

The Soviet-Chinese relations remained extremely tense for many years afterwards. The sides would often accuse each other of supremacy and expansionism. The relations began to improve only after the start of the legendary perestroika era in the Soviet Union. However, the warm-up was based on Moscow’s territorial compromise.

USSR’s President Mikhail Gorbachev signed a border agreement with China in 1991. The borderline was drawn on Amur’s waterway. The delimitation and demarcation of the border continued for many years afterwards. In 2005 the border was ratified by Russia’s State Duma and the Federation Council. In 2008, Russia’s Foreign Minister Sergey Lavrov signed a package of documents in Beijing to close the territorial dispute for good. Beijing received nearly 174 square kilometers of land near Russia’s Khabarovsk, and China’s border became 50 kilometers closer to Russia.

Russian officials stated that the two countries would be able to develop their cooperation and strengthen friendly relations in the new border area. China still has a number of open border disputes with its neighbors – Korea, Japan and Vietnam.

One may only regretfully conclude now that the border dispute between Russia and China remains open too. A single-handed endeavor to change the waterway of the Ussuri River is a dangerous idea. The Chinese administration is obviously aware of the fact that such actions violate the border agreement. However, they still prefer to ignore Russia’s protests.