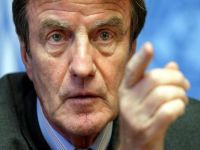 There was harsh condemnation from the Turkish Foreign Ministry after the Israeli attack.

A forceful European response to the new Israeli aggression is required. In a statement, the Chancellor expressed that he is deeply saddened by the tragic consequences of this act and demanded a speedy and thorough investigation into the circumstances of the drama.

"Nothing justifies the use of this sort of violence which we condemn," he said.

The head diplomat said that these events point out that the current situation in Gaza is unsustainable and is in need of an urgent political response.

"We will take the necessary measures to prevent this tragedy from re-escalating into new violence," he added.

In turn, the General Delegate of Palestine in France, Hind Khouri, described the event as barbarism and that it must be condemned by the entire world.

"It's time to end Israel's impunity and to continue dialogue," he told RTL radio.

Monday morning the Israeli navy intercepted an international fleet of six boats carrying 10,000 tons of humanitarian aid destined for the Gaza Strip as an attempt to break the blockade imposed by the Zionist regime over Palestinian territory.