What Can Brazil Do Without Lula?

2010 is the year of change for Brazil. In October, the country is to elect a new President. The current President Luiz Inácio Lula da Silva can no longer be a candidate since the Brazilian Constitution only allows the same President serve two terms. The main presidential candidates are former governor of São Paulo, José Serra, and Dilma Rousseff, handpicked by President Luiz Inácio Lula da Silva. 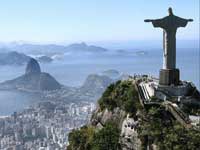 What Can Brazil Do Without Lula?

Lula will be leaving his successor a rich legacy. Today, due to high level of economic development in all spheres and large number of employable population, Brazil is significantly ahead of the rest of Latin America. In terms of GDP, it is the eighth economy in the world. Lula’s Presidency that lasted two terms, since 2003, made the country to be what it is now.

Lula came to office when the country was falling into abyss. His predecessor Fernando Cardoso could not fight the inflation and borrowed so much money from the IMF that the country was preparing for a default. Many economists argued about when exactly it was going to happen, thinking the new “left President” would only make things worse. Yet, instead the country not only got out of the hole but achieved great success both in economy and foreign policy.

Lula managed to properly direct the energy of radical Trotskyists and the experience of market economists in his government. As a result, he has built a thriving economy and more or less stable social sector, which none of other countries of the region have.

Brazilian economy deserves special attention. Raw materials and agricultural products are not the only things it supplies to the world markets. The main export is aviation equipment, transportation, electric equipment, fabrics and shoes. The revenue from the export of these items is significantly larger than the revenue from iron ore, energy, rare metals and agricultural products, including famous Brazilian coffee, soy, sugar and fruit.

During Lula’s presidency the manufacturing sector got a strong impetus for development. The sector was heavily invested into. The “left” President realized that without stimulus to manufacturing and production of competitive goods the country will remain a giant “banana republic.”

Lula managed to keep inflation at bay, something many countries are unable to do. He even paid the IMF debt ahead of time in 2005. Today Brazil is no longer a borrower but a lender who provides help to the third world countries on easier terms of payment (compared to the West).

Lula has proved that Goldman Sachs was right when it included the country into virtual BRIC group (Brazil, Russia, India, and China) that is expected to experience rapid economic growth by 2050.

The success with the internal policy has an effect on the foreign policy. Brazil has become a regional arbitrator in its own way, and it is taken into account by everyone from the outrageous Venezuelan Hugo to the pro-American Columbian Uribe.

Interestingly enough, Brazil became a protector of Honduran president Zelaya overthrown in 2009 (he was hiding on the territory of the Brazilian embassy).

It is worth mentioning that Brazil currently has the strongest armed forces in Latin America.

The US attitude towards Brazil is controversial. On the one hand, the US is ineffectively trying to direct Brazil towards the American policy. It even made some “amicable gestures” like a recent purchase of 200 Brazilian battle planes Super Tucano. On the other hand, it is secretly sabotaging Brazil by trying not to allow the enhancement of its position in other countries of the region.

Americans are definitely concerned with Brazil’s actions that contradict the US’s opinion increasingly more. The West frequently calls Lula’s policy immoral, while it proved to be extremely good for Brazil. Lula is friends with Hugo Chavez who sells him cheap oil, and George W. Bush Jr., who has the market important for Brazilian export. At the same time, he allowed neither of them to interfere with his affairs.

Now he has befriended China that became his main partner and shifted the US to the second place.

When the US suggested introducing sanctions against Iran for the refusal to stop the nuclear program, Lula asked to give him time to convince Ahmadinejad to agree with the demands of the world community. Washington considered it to be an attempt to “talk against time.”

“Lula’s policy is first of all aimed at strengthening of Brazil, making it one of super powers of the 21 century. Here the interests of Brazil and the West clash,” Boris Martynov, Deputy Head of the Institute of Latin America in Moscow told Pravda.ru. “Many are used to Latin America looking up to the West, mainly, the US, but the times have changed. It is starting to build its own path without the American influence.

As for the Iranian issue, it is strongly politicized. Yes, Brazil is trying to protect its Iranian partner. Yes, Brazil has its own interest in Iran’s nuclear energy. This area has been rapidly developing in Brazil in the past few years. Soon there will be six nuclear power stations in the country. This Brazilian experience is interesting for Iran . Who said it is bad ? And who said that Iran is not capable of creating its own “ peaceful atom ”?

Why does Brazil have to listen to the Americans who simply do not like the fact that Iran is not in their sphere of influence? Why are they not in a hurry to introduce sanctions against Israel and Pakistan who got nuclear weapons long time ago on the US no-objection basis? Lula’s independent course has allowed him to gain a solid political capital in the third world countries.

As for Brazil’s future, it will continue its development to become a super power in the 21 century. Whoever comes to office after Lula will stick to the traditional course and stand up for the country’s interests without considering the US,” the expert thinks.