How much does military personnel in the former USSR republics make? It would be curious to peep in the wallets of military men from Great Britain, Germany and other countries to compare. 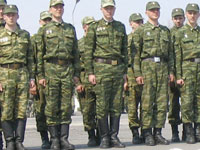 Monetary allowance of draftees is approximately $5 a month. Privates serving on a contract basis are paid $35 - 40. Meanwhile, lieutenants make approximately $600 and generals a little over $1200. The government is not very eager to pay the soldiers compensation for the uniforms it failed to provide, food, presence in the combat area, etc.

A part of the Georgian army trained in compliance with American military programs has been long financed by the USA. Thanks to the US assistance, Saakashvili was able to increase the salaries of his elite military personnel by 300% back in 2004. Their average salary had jumped to $232.

Now the average salary of the elite officers is $600. Regular officers make 2 to 3 times less. In August of 2008, while preparing for the intrusion to Sukhumi and Tskhinvali, Saakashvili increased the allowance for the intelligence officers by $180. He also promised additional $90 to those who spoke foreign languages (probably, Russian).

The average salary is $240. Lieutenants make $180 - 190. Captains are paid $300. “A Ukrainian captain with a college degree makes less than a genitor in Kiev,” wrote online newspaper Focus. Army majors make $350. Lieutenants of Ukrainian Security Service start from $200 - 250 a month. The average salary of a Security Service officer is $400. At the end of May the officials suggested increasing tenure required for retirement to 30 - 35 years, and limit the retirement with $700.

Draftees make $24 a month. Soldiers and sergeants-contractors make $250 - 300. Those who served for 10 years make $400. Lieutenants make $470 a month. Officers make $670 – 700 on average. Army generals get $380 for the “stars” alone. There are also premiums and compensations. For example, utilities compensation is $23 a months, and health compensation is up to $200 a year. Eighteen months ago monthly allowance of Kazakh military was increased by 40%. The military officials of the country claim that the Kazakh army will soon outrun any army of the CIS in terms of compensation.

Draftees make approximately $3 a month. Contractors are paid $65 - 70. Junior officers make $200. Majors and colonels make approximately $300. For comparison: the chief district architect of a region makes $30, and a state employee makes $10 - 15. To improve the situation with military allowances, the government decided to create a legislation that makes it legal to pay for unwillingness to join the army as a draftee. The amount is equal to $300, but the military are yet to see the benefits of it.

Monthly allowance for military is so small that they are ashamed to name the numbers. For instance, a colonel makes $120 - 130. This is almost twice as little as a Russian contractor makes. Monthly allowance of a Russia sergeant-contractor stationed in Dushanbe is nearly 10 times larger than that of a Tadzhik sergeant. Draftees get paid $1.5 a month, lieutenants - $56, majors - $80 a month. The average salary of a Tadzhik teacher is $20.

While the information about military allowance in former USSR republics or countries-participants of the Warsaw Pact is hard to obtain, Germans have no financial secrets. Anyone can go to the website of the Ministry of Defense to satisfy their curiosity.

Monthly allowance in Germany is one of the highest in NATO and regularly increases. The base allowance depends on rank and length of service, while premiums depend on pay scale group and family situation. Military personnel who have children are paid monthly allowance for kids: $125 for one child, $250 for two children, $565 for three, $880 for four and $132 for every additional child. German military are also paid for overtime, $0.88 to $3.75 depending on the title. Flying squads get $611 a month in premiums. Personnel who regularly jump with a parachute get paid $150 extra a month. Special Forces and military swimmers are paid$1170 in premiums. Surface ships personnel get $105 extra a month, while submarine personnel enjoy $300. Another $150 is paid for long trips. Premiums for missions depend on the location category. There are six categories all together. The first one is a location that does not differ much from the conditions of permanent location, but it still pays $33 a day. The second category assumes life in tents, tough conditions and extra expenses, and pays $53 per day. The highest category includes combat zones and life risk, and pays $120 per day. In addition to the money, the German army attracts recruits with an opportunity of education and one of 60 civil professions.

The British army includes contractors only. At a first glance they are paid decent money. Yet, Sir General Richard Dannatt said that the most acute issue was “extremely low” salary of military personnel. In his worlds, gas station employees make more than soldiers.

All military personnel participating in foreign missions receive premiums equal to the salary. The French Legion Etrangere pays its warrant officers $5,650. In addition to the salary officers receive bonuses depending on the task. They are provided with clothes, food, dwelling and medical treatment free of charge. The Legion accepts people of age 17 to 42. Citizenship and moral standing do not matter.

Privates are paid $100 - 200 a month depending on location of service. Single soldiers are paid double allowance so they could pay for rent and utilities. If their families live abroad, soldiers are entitled to 21 days of leave per year, with the travel expenses paid by the army.

The average salary of a general is $11,000 a month. Lieutenants make approximately $1200, and the army always complains about low salaries of low-rank officers. It is usually high ranking officers whose salaries get increased. While they get 7% of increase a year, low ranking officers only get в 1.5%. of increase.