Over three hundred thousand people (more than three per cent of the Portuguese population) marched today in central Lisbon in a mega-demonstration against the socially insulting policies of the conservative, right-wing Government provided by the Socialist Party, an insult to Socialism, an insult to Government and the epitome of laboratory politics practised by professional politicians who have never had a real job. 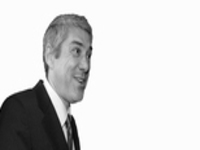 The Portuguese people marched today in protest against the horrific social austerity package proposed by the ruling Socialist Party (which in fact is anything but Socialist) in a demonstration supported by the GCTP Union, the Portuguese Communist Party, Green Party and the Left Block.

The Portuguese people have been governed by the two main parties, the Social Democratic Party and the Socialist Party, sometimes in coalition with the Popular Party (Christian Democrats) since the “Revolution” of 25th April 1974. What they have witnessed since this putsch, has been a wholesale selling-off of the country, the destruction of its industries, the destruction of its agriculture and fisheries. In return for what?

Each and every new Government usually starts its term in office with the sickening phrase “We are going to ask for sacrifices from the Portuguese people”. This has been going on for three decades and where have these sacrifices led the people?

Now, the Socialist (joke!) Government of Prime Minister Jose Sousa (who calls himself Jose Socrates, as if he were some academic…another joke in Portugal) has announced an austerity package which is no more or less than an insult to the Portuguese people who have had to put up with these professional politicians practising laboratory politics, without any idea of what it is to work.

Hence the three hundred thousand (plus) people marching through central Lisbon this Saturday.

Under the able Government of Mr. Sousa (or Socrates, or whatever he wants to call himself) and previous Governments led by the Social Democrats (including the ten years that the former Prime Minister, now President of Portugal, Anibal Silva, who calls himself Cavaco Silva for some reason, led the country at a time when Euro-billions were pouring in and were subsequently wasted) the average salary in Portugal has reached a pinnacle of some 800 Euro per month. Supermarket food prices must be among the highest in Europe.

This Government has done absolutely nothing whatsoever to help the Portuguese people, starved of hopes and expectations and squeezed more and more in a downward spiral of desperation, while successive cliques of politicians increase the salaries of Members of Parliament, increase travel subsidies and rape the people.