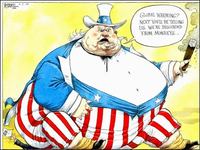 A joint report released by three organizations has issued a report condemning the US policy towards Latin America under President Obama and Secretary of State Hillary Clinton, claiming Washington has failed to deliver any substantial change. Does this indicate that the occupant of the White House has little or no control over the way US policy is delivered?

The joint publication Waiting for Change: Trends in US Security Assistance to Latin America and the Caribbean, was released today and was drawn up by The Center for International Policy, the Latin America Working Group Education Fund and the Washington Office on Latin America. Its claims reveal information which would point toward the President of the United States of America being little more than a puppet, unless substantial change is delivered, where actions speak louder than words.

The report indicates that the Obama Administration’s policies in Latin America continue to rely heavily on military operations and do not pay sufficient attention to human rights issues. It goes on to claim that during 2009, many countries in Latin America accused Washington of arrogance, inattention to human rights and failure to deliver on democracy, especially after its secret agreement to set up military bases in Columbia.

The report reveals that 47 per cent of the 3 billion-dollar US aid package for Latin America goes in fact towards military programs and police forces, an even higher proportion than under the Bush regime.

“The main face that most of the region is seeing from the Obama administration is a military one,” claims one co-author of the report, Adam Isacson, senior associate for security policy at the Washington Office on Latin America. For fellow co-author Lisa Haugaard, Executive Director of the Latin America Working Group Education Fund, “The Obama Administration’s human rights policy in Latin America has been missing in action”. She criticized the “weak, contradictory response” to the coup in Honduras and made a veiled criticism of Washington’s loyalty towards the odious figure of Uribe: “a stand-by-our-man approach”.

Abigail Poe, Deputy Director of the Center for International Policy, declared that “From Mexico to Bolivia, we are hearing that US aid should be less narrowly focused on short-term drug-supply reductions, more oriented towards strengthening governance and justice and more open to alternative approaches to the entire problem”.

The report concludes that there are some positive signs, now that Obama nominations have entered posts with responsibilities and leaves a ten-point action plan.

Shift aid away from military expenditure and towards people’s needs;

Stand up for human rights, including with close allies (Uribe);

Demonstrate a willingness to change counternarcotics policy through actions;

Reassure Governments about US intentions;

Support policies which embrace a broader approach on citizen security;

Allow for free exchange of people and ideas with Cuba;

Put immigration reform on the agenda – and move it forward.

If Washington delivers on this, we may infer that Obama indeed stands for change. If not, then it is blatantly obvious that he is no more than a puppet whose strings are pulled by AIPAC and the State Department, making a mockery of the entire political system in the United States of America and proving once and for all that it is anything but a democracy.