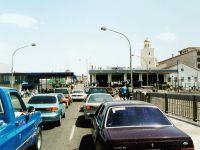 On May 20, in the context of his official visit to the United States, Mexican President Felipe Calderon laid a wreath in front of the Tomb of the Unknown Soldier in Arlington Cemetery, Virginia, in homage to Mexican-American soldiers killed in U.S. military campaigns. The governor broke the very tacit veto, held over the previous mandates, which prevented a Mexican head of state to visit that site.

Calderon pays tribute to the unknown soldier ... and the invasion of Mexico by the U.S.A. The reason for this symbolic backdrop has always been clear: in Arlington, there are U.S. military buried who participated in several armed aggressions perpetrated by our country's northern neighbor against us, included there are those that Washington pulled out of Mexico with more than half of Mexico's territory, as well as the criminal and unjustifiable attack and occupation of the Port of Veracruz (April-November 1914).

While it is true that geography and economy make it relevant and necessary in the current period, for the construction of a smooth bilateral relationship, productive and even friendly, it should not be forgotten that the U.S. has been, since two centuries ago, the main threat to national security and has accounted for many offenses against the sovereignty and integrity of Mexico.

A visit by the head of state to Arlington, therefore, is to accept offenses for which an apology or some compensation was never offered. Furthermore, the gesture was unnecessary considering that during the past five decades it has been possible to develop increasingly close ties with the government of the neighboring country without resorting to the concession made by Calderon.

As unfounded as this act of protocol is, the determination to pay tribute to the Mexican soldiers killed in U.S. wars, since, with this, the Mexican government gives its approval for such war initiatives that are invariably contrary to international law and violate national sovereignty and human rights.

In Arlington, they buried the dead U.S. soldiers from Panama, Afghanistan and Iraq, to mention only the most significant military adventures of recent decades, all of them marked by atrocities and a spirit of prey such as those launched by Washington against Mexico in nineteenth and twentieth centuries.

Moreover, it is inevitable to see Calderon present at Arlington for more than one episode in submission of sovereignty, the latest with a clearly defined agenda: the signing of the Merida Initiative, through which U.S. agencies and the military were allowed to to meddle in Mexican affairs, through advisors, intelligence work and supply of weapons, equipment and vehicles.

Other examples are Calderon's commitment in delivering substantial parts of the oil industry that, by constitutional text, is owned and an exclusive activity of the nation, in favor of transnational companies, many of them American, and the regrettable decision, announced last March and in force since May, to resign the visa requirement to enter Mexican national territory, accepting in its place a similar document issued by the U.S. government.

When Calderon was in Washington, Mexican authorities requested assistance from the DEA (Drug Enforcement Administration) and the FBI in the investigation into the kidnapping of Diego Fernandez de Cevallos. With this application, Mexican officials conducting the investigation not only tacitly admit their incompetence, but they expose the classic and discriminatory attitude that the federal government and Querétaro have maintained around the capture of the PAN politician (PAN, National Action Party).

Until now, similar surrender of sovereignty had not been carried out.