A battery of US Patriot missiles appeared on May 24 in Morag, Poland. This town with the 15,000-strong population is situation only 70 kilometers from the border with Russia’s Kaliningrad enclave. The battery of missiles is supposed to become a replacement for the US missile defense system, which the Polish administration was eager to deploy for several years. 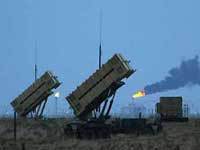 US President Barack Obama decided to shelve the plans to deploy elements of the national missile defense system in Poland and the Czech Republic in the autumn of 2009. The Polish government was very disappointed about such a turn of events. US official later said that they considered Poland to be one of their key NATO allies. As a result, the USA and Poland signed an agreement to deploy a battery of Patriot missiles in the Eastern European nation.

The document stipulates the appearance of a whole base for American missiles. About 100 US servicemen will provide technical and maintenance works at the new base in Poland. They will also provide training services for Polish military men. The USA will also take care of the modernization of the Polish air defense system.

American and Polish officials said that the missiles would defend the European nation against possible attacks from Iran and North Korea. Originally, the missile complexes were supposed to be deployed near Poland’s capital, Warsaw. However, the Polish administration decided to relocate them to the army base near the town of Morag – the nearest base to Russia’s Kaliningrad region. Several Polish newspapers wrote that the missiles would appear at the base to restrain Russia’s “imperial ambition”.

US and Polish officials simply responded that the missiles would not be aimed against Russia.

The long-awaited moment for Poland finally came on May 24. For Poland, the Patriot missiles were as welcome as flowers in May. Poland’s Defense Minister Bogdan Klich said that the choice of the location was in no way related to Russia.

“It had no political or strategic significance. Good infrastructure was the only reason,” the official said.

The army base in Morag is a huge piece of land by Polish standards. The territory is encircled with a brick wall and barbed wire. A placard near the entrance to the base says the following in four languages, including Russian: “Military area. No Entry.” Another placard, behind the traffic control barrier, says the following in the Polish language: “NATO – Guarantee of Peace.”

It is worthy of note that the local authorities have been propagating the appearance of US missiles in the small town where unemployment is the biggest problem. It was particularly said that US servicemen would live in dormitories and attend local bars to support the little town and give local residents an opportunity to make their living. It later turned out though, that the US soldiers would cook their food themselves and live inside the base.

As a result, local residents organized a protest action the day when US military men arrived in their town. Nevertheless, the majority of the Poles living in Morag do not know whether the base is going to bring more good or bad. The base was officially opened on May 26.