The Kurdish problem has been getting more and more serious for Iran. The problem remains unsolved since the beginning of the 20th century: the Iranian Kurds have no autonomous rights. Many of them see the establishment of the Kurdish state as the only way out of the crisis. 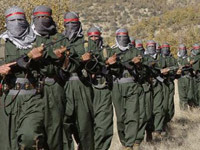 The Iranian Kurds tried to create an independent state in 1912 and then in 1917-1922, albeit to no avail. The failures were based on disunity among the Kurds and the absence of stable support from the outside.

Another opportunity to create the independent Kurdish state appeared after World War Two. The state even existed for about a year – from January to December 1946. It goes about the Republic of Mahabad, which appeared after the arrival of Soviet troops in northern Iran in August 1941 (Moscow wanted to split Iran to incorporate the nation’s north in the Azerbaijan Republic).

However, Stalin withdrew the troops in May 1946 under the pressure from the West. The Iranian authorities subsequently established “law and order” in the country.

The Kurds did not forget their republic. They could not publish newspapers in their native language, conduct school classes in Kurdish, etc.

As a result, the Iranian Kurds made a considerable contribution in the overthrowing of the shah. They organized a mutiny in 1967, which lasted for 18 months, but was brutally suppressed by the authorities. However, it did not make the Kurds cease their struggle. The suppression of national minorities was one of the basic reasons that ended shah’s regime.

The third chance for the Kurds to establish a state of their own appeared in the beginning of 1979, during the Islamic Revolution in Iran. They took an active participation in the revolution and even took power in the Iranian Kurdistan in their hands.

The new government in Teheran was unwilling to grant autonomy to the Kurds and suppressed them again in the winter of 1979-1980.

Ayatollah Khomeini’s death in 1989 did not improve their condition. However, the Kurds continued their struggle in emigration. They were ignored again during Khatami’s “liberal” presidency (1997-2005).

The Kurds are not considered a separate nation in Iran. Therefore, the Iranians do not think that they deserve autonomy. The Kurds have no official representatives in the Iranian parliament, although other non-Persian ethnic minorities have their deputies there, which obviously irritates the Kurds.

They are also concerned about the disproportionate assignment of budget funds to the regions with Persian and non-Persian population. The investments from the Iranian government to the local economy are hardly visible. As a result, the level of unemployment in the Iranian Kurdistan is very high. To crown it all, the income per capita in Kurdistan is the lowest in comparison with other regions of the country.

Kurdish politicians and public figures have taken a number of attempts to establish peaceful dialogue with the government. However, they did not lead to any result. It seems that Iran’s sitting President Mahmoud Ahmadinejad pays more attention to the Kurds than his predecessors did since he regularly visits the regions of his nations and meets with the Kurdish people. Nothing has changed for them after all those visits, which makes the people feel disappointed in Ahmadinejad.

There are no conflicts in Kurdish regions at present moment. No one tries to solve any problems with the use of military methods because they know that any upheaval will not end in their favor.

Nowadays, the Kurds say that only freedom and equal rights will put an end to extremist sentiments and movements. Officials at the Iranian administration claim that the West uses the unstable situation in Kurdistan to “explode the country from within.” Indeed, Kurdish military groups receive the funds, which the USA assigns to maintain democracy in Iran.

For the time being, the Kurdish leaders prefer to wait and see what happens next. They want to know what the international community decides to do with Iran in connection with the nation’s nuclear program. If the West launches a military operation against Iran, the Kurds will use it as an opportunity to establish their own state again.

“The Kurds are aware of the fact that the West, including the USA, is not a reliable ally in the struggle against the Iranian regime since the West pursues its own goals in the region, and those goals do not always coincide with the needs of the Kurdish people,” Iskhan Miroyev, the editor-in-chief of the Free Kurdistan newspaper told Pravda.Ru.

Even if the Kurds manage to obtain independence, it will not solve all their problems.

The solution to the Kurdish issue is in Turkey, not in Iran, because the majority of Kurds live in Turkey. If Kurdistan splits from Iran, it may affect the whole Middle East. Now the West can continue to use Kurdistan in its political games in the region.