The Taliban movement reminded everyone of its existence on the threshold of another large-scale offensive of coalition troops in Afghanistan. A powerful explosion took place in the center of Kabul, the capital of Afghanistan, on Tuesday morning. A suicide terrorist blew up the car bomb near the location of the parliament, governmental premises and diplomatic missions. 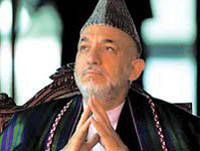 The blast wave reached the building of the nation’s energy ministry and Russia’s embassy in Afghanistan. At least 20 were killed and 52 were wounded in the terrorist act. Five of the victims were reported to be foreign soldiers.

The suicide bomber attacked a NATO convoy, news agencies said. Taliban officials immediately claimed responsibility for the terrorist act and said that the mine warfare would be continued. Talibs urged all Mujahedeens to struggle more actively against the invaders within the scope of the Al-Fatah (Victory) operation.

The Talibs also called upon the servicemen of the Afghan army and the police to take the side of the fighters for Islam and asked the workers and managers of construction and road companies to stop working for the imperialist invaders. Spokespeople for the terrorist movement also said that they would inevitably win the war and make the invaders leave their country.

The recent terrorist attack in Kabul is probably a part of the Al-Fatah operation. The Talibs earlier attacked a German convoy in northern Afghanistan. German officials said that the column suffered no losses in the battle, although a Talib official later stated that one German tank and its entire crew had been destroyed.

The mine warfare gathers pace and claims more civilian victims. Dozens have been killed and injured in mine explosions in Afghanistan over a weekend. The defense ministry of the war-torn nation reported the destruction of over 30 Talib gunmen in different provinces of the country. Talibs say that they destroyed 10 policemen and six police vehicles.

One has to come to conclusion that the Taliban has become more active across Afghanistan including its capital, Kabul. It is worthy of note that subversive activities of Mujahedeen fighters in large cities of the nation was minimized during the Soviet presence in Afghanistan. Today, the situation is entirely different.

The most recent terrorist act in Kabul coincided with another attack against a police truck in the north-west of Pakistan, in which eight were killed and dozens were injured. Pakistani Talibs said that it was their response to the report from the Pakistani military about the elimination of 60 Talibs in the territories adjacent to Afghanistan.

One may say that Afghan and Pakistani Taliban fighters coordinate their actions, although NATO officials previously tried to deny such a possibility. Americans and their allies do their best to put an end to the activities of the Taliban in Afghanistan. They send more and more people to the nation in a hope to finally destroy the movement.

The contingent of foreign troops in Afghanistan is supposed to reach 150,000 people, which reflects the intention of the coalition to cease the longstanding struggle. This goal looks totally hopeless since there is no effective army in the central part of Afghanistan which could struggle against the Taliban after US troops are withdrawn in July 2011. Experts say that the Afghan administration still does not perceive the war against the Taliban and al-Qaida as its own war.

Hamid Karzai stated after the most recent terrorist act in Kabul that he was extremely upset about it. It is not the first time when he is upset about Talibs’ attacks in the Afghan capital. However, the Afghan president either can not or does not want to take any decisive measures against the terrorists.

The USA does not see any alternative to Karzai. The failure of the operation in Afghanistan would cause serious damage to the Obama administration. The USA has to build special relations with such a weak figure as Karzai, who shows painful reaction to the tutorial tone of the American administration.