Last Wednesday, The Korean Central News Agency (KCNA), the main propaganda mouthpiece of Pyongyang, delivered sensational news. On the one hand, the news seriously alarmed politicians and military, but on the other it raised serious doubts among atomic scientists. 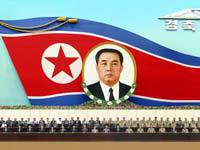 According to KCNA, for the birthday of the first country’s leader Kim Il-sung, which is a great national holiday, North Korean atomic scientists have successfully mastered thermonuclear fusion technology.

Reporting on this outstanding scientific achievement Pyongyang decided to make its people happy with this grand gift in honor of Kim Il-sung, who they had been considering the symbol of God on Earth for many years. The second great leader, the son of the first great leader, Kim Jong Il , intended to scare the world yet another time with DPRK’s capabilities for growing nuclear muscles.

Although there is no mentioning of possible military application of the technology in KCNA message published by the official North Korean paper Nodon Sinmun, if there is at least some truth to it, it means that North Korea is close to creating a hydrogen bomb. Meanwhile, the USA and Russia had their thermonuclear bombs years ago.

Such weapons have the same adverse effects as nuclear weapons but have more powerful explosions that are theoretically only limited by the number of components available.

Should we raise the alarm and call for the meeting of the UN Security Council to curb Pyongyang ’s thermonuclear ambitions? Is the threat of DPRK creating a hydrogen bomb that great?

The world is doubtful of the information released by North Korea because there is not a single device in the world capable of controlled thermonuclear fusion. Englen Azizov, Director of the Russian Institute for tokomaks physics, thinks this message is doubtful. “This is either a mistake in information rendering, or pure nonsense. North Korea does not have appropriate equipment. It never developed anything for this technology.”

DPRK news agency indirectly confirms the scientist’s theory stressing that North Koreans achieved this success “on their own,” under the conditions when DPRK was going through tough times and “there was lack of everything in the country.”

Thermonuclear fusion has been applied as uncontrolled process, i.e., thermal explosion, Azizov explained. Achievement of controlled reaction is the main issue scientists are struggling to solve. Basically, they need to take control over, “lock” and direct the energy of a hydrogen explosion the desired way. By now scientists from several countries have chosen the location for building the International Thermonuclear Experimental Reactor in the South of France, 60 km from Marseille . The project involves the EU, India, China, Korean Republic, Russia, Kazakhstan, Canada and Japan.

Is North Korea capable of achieving the results that are a hard nut to crack for the leading world powers? According to a representative of the Korean Republic, Seoul has no information regarding availability of components in DPRK required for research in the area of thermonuclear fusion. “Creating such object secretly is not an easy task, and therefore, we believe that the information has no basis to it,” the official said.

He thinks that even the ITER project in France provides no guarantees even after 50 years of experiments. The reaction of controlled thermonuclear fusion is considered a limitless energy supply, but its application is not considered possible.

Today the main idea for solving the controllability of thermonuclear explosion issue is the application of magnetic plasma confinement. The most promising devices for such confinement are tokomaks that were first developed in the USSR in 1955. As of today, over 300 tokomaks have been built all over the world, including the US, China, Europe and Japan.

North Korea has none. Vladimir Fortov, academician of the Department of energy, machine building and control processes, is convinced that the information provided by DPKR is propaganda. “ This is a silly position . Propaganda . It is possible that someone just decided to present a gift for the leader’s birthday.”

It is hard to disagree with this opinion. Therefore, victorious speeches of Pyongyang ’s propaganda about mastering the processes of thermonuclear fusion can be brought into line with mockups of ballistic missiles shown in the parades in honor of the leader’s birthday.