The Brazilian President has brokered a fuel swap deal which solves the Iranian nuclear question once and for all, proof of his diplomatic skills and a clear reminder to the international community how crisis management should be handled. The Russian Federation is very much a part of this same approach. 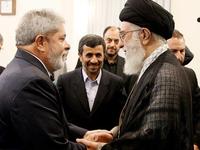 Luiz Inácio Lula da Silva, the outgoing President of Brazil, has just given the world in general, and the United States of America in particular, a lesson in how international diplomacy should be approached. Backed by the Russian Federation and the PR China, President Lula went to Teheran this weekend looking to broker a deal which once and for all, would resolve the Iranian nuclear question. He comes away on Monday with the agreement in his hand.

Under this agreement, the IR Iran will ship uranium abroad for enrichment and the first stage will be the delivery of 1,200 kg of low-enriched uranium (LEU) to Turkey, subject to approval by the Vienna Group, which will have one year to deliver 120 kg of nuclear fuel to Iran.

The agreement reaffirms “the commitment to the Treaty of Non-Proliferation of Nuclear Weapons” and “the right of all State Parties, including the IR Iran”, to develop, research, produce and use nuclear energy (and nuclear fuel cycle activities, including enrichment) “for peaceful purposes without discrimination”.

Full text of the Declaration

“Having met in Tehran, Islamic Republic of Iran, the undersigned have agreed on the following Declaration:

“1. We reaffirm our commitment to the Treaty on the Non-Proliferation of Nuclear Weapons and in accordance with the related articles of the NPT, recall the right of all State Parties, including the Islamic Republic of Iran, to develop research, production and use of nuclear energy (as well as nuclear fuel cycle including enrichment activities) for peaceful purposes without discrimination.

“2. We express our strong conviction that we have the opportunity now to begin a forward looking process that will create a positive, constructive, non-confrontational atmosphere leading to an era of interaction and cooperation.

“3. We believe that the nuclear fuel exchange is instrumental in initiating cooperation in different areas, especially with regard to peaceful nuclear cooperation including nuclear power plant and research reactors construction.

“4. Based on this point the nuclear fuel exchange is a starting pint to begin cooperation and a positive constructive move forward among nations. Such a move should end to positive interaction and cooperation in the field of peaceful nuclear activities replacing and avoiding all kinds of confrontation through refraining from measures, actions and rhetorical statements that would jeopardize Iran’s rights and obligations under the NPT.

“5. Based on the above, in order to facilitate the nuclear cooperation mentioned above, the Islamic Republic of Iran agrees to deposit 1200 kg LEU in Turkey. While in Turkey this LEU will continue to be the property of Iran. Iran and the IAEA may station observers to monitor the safekeeping of the LEU in Turkey.

“6. Iran will notify the IAEA in writing through official channels of its agreement with the above within seven days following the date of this declaration. Upon the positive response of the Vienna Group (US, Russia, France and the IAEA) further details of the exchange will be elaborated through a written agreement and proper arrangement between Iran and the Vienna Group that specifically committed themselves to deliver 120 kg of fuel needed for the Tehran Research Reactor (TRR).

“7. When the Vienna Group declares its commitment to this provision, then both parties would commit themselves to the implementation of the agreement mentioned in its six. Islamic Republic of Iran expressed its readiness – in accordance with the agreement – to deposit its LEU (1200 KG) within one month.

“8. In case the provisions of the this Declaration are not respected Turkey, upon the request of Iran, will return swiftly and unconditionally Iran’s LEU to Iran.

“9. Turkey and Brazil welcomed the continuous readiness of the Islamic Republic of Iran to pursue its talks with the 5+1 countries in any place including Turkey and Brazil, on the common concerns based on collected commitments according to the common points of their proposals.

“10. Turkey and Brazil appreciated Iran’s commitment to the NPT and its constructive role in pursuing the realization of nuclear rights of its member states. The Islamic Republic of Iran, likewise appreciated the constructive efforts of the friendly countries, Turkey and Brazil, in creating the conductive environment for realization of Iran’s nuclear rights.”