Swallowing 150,000 EUR at Once Becomes Problematic in Britain

The British authorities withdrew 500-euro notes from circulation and presented a curious explanation for this decision. They said that 90 percent of such notes were used by organized criminal groups, especially those involved in drug trafficking. According to the British press, the nation’s law-enforcement agencies intended to complicate the transportation of cash assets received as a result of illegal transactions. 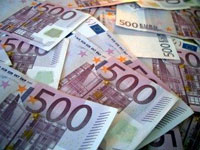 Swallowing 150,000 EUR at Once Becomes Problematic in Britain

It is an open secret that international criminal groups avoid bank wires and do not hurry to open accounts. Accounts saving over 10,000 euros always raise careful attention and suspicion in the EU and many countries of the world.

British officials apparently believe that criminal groups mostly used stacks of 500-euro notes in their settlements because the stacks of such large notes are very good for illegal transportation and storage. It is comfortable to transport 500-euro notes in cases and boxes, as well as in cigarette packs and stomachs.

For instance, one million British pounds sterling (1.2 million EUR) weighs about 50 kilos. A similar amount in US dollars is 15 kilos. The same amount of money in 500-euro notes weighs only 2.2 kilos. Needless to say that it does not take much space either.

Five hundred-euro notes are very attractive to those criminals, who need to transport cash assets in their stomachs. Specialists calculated that an adult individual can swallow 177,500 euros. Twenty-four thousand euros can be easily hidden in a cigarette pack.

British officials believe that the most recent decision will not have an opportunity to transport large amounts of cash in their luggage anymore. They will not be able to buy an economic class ticket over strict luggage weight regulations, but will have to buy business class tickets instead where it is allowed to carry luggage of larger weight. This logic seems to be strange. It just so happens that the gangsters who work with millions of euros do not have an extra hundred or two to get a business class ticket.

Britain’s Serious Organised Crime Agency (SOCA) said that it would be impossible to buy 500-euro notes in Britain, and the criminal community would have to look for other methods in their money-laundering activities.

"There is no doubt that the main UK demand for the 500-euro note comes from serious organized criminals," said the agency's deputy director, Ian Cruxton. "The banknote wholesalers have shown decisive leadership in withdrawing supply. This is a bold and welcome move which will cause substantial disruption to criminals' ability to move and launder large quantities of cash. Today's announcement means that accessing 500-euro notes will be much more difficult," SOCA said. "Anyone trying to source them will attract attention," the official added.

The 500-euro notes are ironically dubbed as “Bin Ladens” in Britain: everyone knows that they exist, but no one has ever seen them, The Independent wrote. Britain has its own currency, the British pound, and most Britons do not have euro cash. However, even in the European Union a person, who gives a 500-euro note to pay for their purchase in a store, raises suspicion.

The mass media of other European countries also say that Spain, Italy and France may join the initiative to ban the circulation of 500-euro banknotes. Will it stop criminals taking into consideration the fact that small private jets enjoy more and more popularity in the West? Their passengers and pilots do not have to go through any inspection. Is it an attempt of the new British government to bite the EU yet again?

Sergey Fyodorov, a senior official with the Institute for Europe of the Russian Academy of Sciences, said that the withdrawal of 500-euro notes would not be able to stop international criminals.

“Why do they have to fly at all? They can ride bullet trains, and there is no registration or control procedure there. The conservatives have always been skeptical towards the EU. They insist that Great Britain is an island that shall not be regarded as “Europe” as the continent. It is not ruled out, though, that the British law-enforcement agencies simply try to demonstrate their efforts to struggle against organized crime,” the specialist said.

It is worthy of note that withdrawing 500-euro notes from circulation will require additional funding, which could be problematic during the time of the economic crisis. In addition, it is extremely difficult to counterfeit these notes. Fake 500-euro notes make only 0.5% in all counterfeit money in Europe.