India will begin the development of its own anti-missile defense system in 2010, the first elements of which, according to reports in Indian newspaper The Hindu, will appear in 2012. The system will be completed by 2016. This information was announced by the Head of the Defense Research and Development Organization (DRDO) in India. 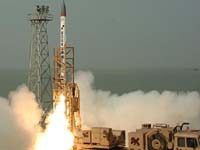 The anti-missile defense system is intended to fulfill various functions, including the attack of targets at a height of over 50 km (in the stratosphere). The anti-missiles PAD and AAD have been designated to carry out this function.

The head of DRDO and the scientific advisor of the Ministry of Defense, V. K. Sarasvata, has announced that Delhi intends to develop not only land-based missile defense, but also sea-based. The central function of the ship-based version will be the interception of winged rockets at a distance of up to 70 km. It is being developed in cooperation with Israel in the framework of the LRSAM (Long Range Surface-to-Air Missiles) program.

Delhi’s first public declaration about its readiness to create its own anti-missile defense system was given in March 2009 by the same Vijay Kumar Saraswat.

Saraswat confirmed that India had all the necessary apparatus apart from counter-missiles, which are still being developed. At that time, Saraswat named a different timescale, stating that the system would be created by 2011. The main reason for the delay is the counter-missiles, which remain unfinished. Moreover, tests on them have not been completed: after 3 successful tests on the 15th March, an unexpected error was encountered. The missile interceptor was unable to hit its target, the ballistic missile Prithvi. Tests are now planned to continue until 2012, and the quantity of test launches of the counter-missiles will be increased.

According to news from India, the anti-missile defense system is intended to provide protection from ballistic rockets from various distances. The first line of the Anti-Missile Defense is calculated against enemy rockets from short- and mid-range (up to 2000 km); the second against those from afar.

The “short-range” anti-missile defense is - glaringly obviously - intended to defend India against Pakistan, with whom India is in almost permanent conflict; it is precisely Pakistan which has missiles that work at a radius of up to 2000 km. Who, though, is the “long-range” anti-missile defense directed against? And how worthwhile is the realization of such an ambitious project? Pravda.Ru put these questions to experts Tatiana Shaumian and Aleksandr Khramchikhin.

In the opinion of Tatiana Shaumian, Director of the Centre of Indian Studies, “the development of a national anti-missile defense system is fully in the country’s interests. After all, it’s not just about Pakistan, with whom India has been in conflict more than once, and where the undecided Kashmir problem remains. Relations with China are not cloud-free either, and Beijing, to this day, has not let go of territorial pretensions in relation to Delhi. In addition to which, China’s own development of anti-missile defense has served to spur India on.”

“Creating their own anti-missile defense system is absolutely essential for India”, Aleksandr Khramchikhin, the deputy Director of the Institute of Political and Military Analysis, asserts. “New cause for aggravation between Delhi and Islamabad could arise at any moment.

It must not be forgotten, however, that India’s strategic enemy in the region is not Pakistan but China. An anti-missile defense system would play an important role in deflecting any possible Chinese military expansion. It is almost certain that these are the two upcoming super-powers of the 21st Century, and sooner or later they will clash as they confront each other for domination on the world stage when the USA begins to weaken and gradually retreat from the political arena. In any case, though, nowadays, the possession of one’s own anti-missile defense system is considered to be one of the attributes of a super power, and in this regard India does not want to lag behind China and the USA”.

It is doubtful, though, that an indigenous anti-missile defense system will guarantee the country complete safety. It goes without saying that Delhi’s main opponent in the region – Islamabad – will not look calmly at the raising of an anti-missile shield by its southern neighbor. It is highly likely that Pakistan will try to build its own analogous system. China, too, will almost certainly begin work on the creation of weapons capable of overcoming the Indian anti-missile defense. Thus the arms race in Southern Asia, having moved onto a new level, will continue.