Kyrgyzstan: Roza Rules! Marching Back to Normality in a New Geo-Political Cycle in Central Asia

Amid stories of rebellion and a crackdown in the south, rumours of unrest and gossip about coup and counter-coup, the information coming out of this troubled Central Asian ex-Soviet Republic points towards a growing degree of control by the interim government of Roza Otunbaeva, both in legislative and military terms, as a hundred criminal cases are brought against ex-President Kurmanbek Bakiev. 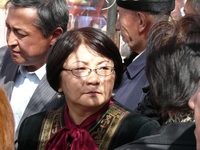 Kyrgyzstan: Roza Rules! Marching Back to Normality in a New Geo-Political Cycle in Central Asia

After a week of further confusion and conflicting reports about an armed uprising in the southern city of Jalal-Abad and allegations that the leader of the Communist Party, Ishak Masaliev, was organizing riots, the reality of the situation this Sunday May 16 is that the former consisted of no more than a few hundred protesters (not thousands) and the latter has resulted in an absence of evidence and a statement to the contrary by Masaliev.

On Saturday some 500 pro-Bakiev protesters gathered in the southern city of Jalal-Abad but were soon dispersed after negotiations between Azimbek Beknazarov, deputy leader of the interim government and the Uzbek leader, Kadyrzhan Batyrov, founder of the University of People’s Friendship in that city, where the protesters were concentrated.

On Sunday morning, local authorities report that the situation is calm and people are going about their daily lives. Bektur Asanov has been appointed governor of Jalal-Abad by the interim government. Asylbek Tekebaev was quoted by the Kyrgyz news agency kg.24 saying that “The authorities have done all they can to avoid escalation of tension”.

Meanwhile special forces and Interior Ministry troops have entered the city of Osh, where the Governor appointed by the interim government, Sooronbai Jeenbekov, has been returned to his position after the imposter Mamasadyk Bakirov declared himself Governor. Bakirov has been banished and is being searched for by the authorities.

The outcome of the arrest of Communist Party leader Ishak Masaliev on Friday on allegations of planning riots is that his lawyer, Kayrat Zagibaev, has declared that his client did not instigate unrest but rather, declared that Parliament is ready to declare its support for the interim government led by Roza Otunbaeva and to voluntarily dissolve itself, paving the way for new legislative elections.

100 criminal cases against Bakiev and clan

The military and legislative situation weighing very heavily now in the favour of Roza Otunbaeva, the last piece of the puzzle is the definitive ousting and accountability of the former regime led by Kurmanbek Bakiev. One hundred criminal cases have been opened against Bakiev, his family and inner circle.

Azimbek Beknazarov, deputy leader of the interim government, has stated that the cases were based on charges of corruption, money laundering, false legislation, forced takeovers of properties, illegal privatisation of State property, and large-scale embezzlement of State funds.

Among the institutions involved in this embezzlement of public funds were Manas Bank, AsiaUniversalBank, the KR Development Fund, Kyrgyztelekom, Severelectro, and Chakan HP.

According to the charges, Bakiev placed 35 million USD of a development fund signed with the Russian Federation into his own bank accounts and those of his cronies.

As was the case with the Orange Revolution on Russia’s western frontier (Ukraine) and after the abject humiliation of the leader of the Rose Revolution on her southern flank (Georgia), now in Central Asia the Tulip Revolution has not only wilted but has been uprooted and destroyed.

As we have seen, the Colour Revolutions failed because they placed in power incompetent persons whose only claim to fame was to make the right soundbites in Washington’s direction and as happens so often, the State Department gets it fundamentally wrong. The message from Moscow is “Not in my back yard!”