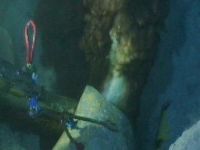 The date April 20, 2010 will certainly mark the biggest environmental disaster of all time, when the oil extraction platform Deepwater Horizon, BP, exploded in the Gulf of Mexico, killing 11 workers and injuring 17. The deepwater platform operated at 1500 meters below sea level, about three times less than the depth of our pre-salt, and just 60 km from the coast of the State of Louisiana.

The National Guard of the United States estimates the spill at 5,000 barrels (800,00 liters) of oil daily, although dissenting voices, based on the video of the site, circulated only on May 13, estimate that it could be 12 times higher.

The huge oil slick flowing the direction of the Mississippi River Delta, and small quantities of oil reached the coast of the States of Louisiana, Alabama and Mississippi on May 3.

Satellite images allow a precise assessment of the extent of the calamity. The NASA ASTER satellite captured night images of the increasing spill on the 7th of May. The thermal photographs cover an area measuring 60 by 240 km, mostly over the Gulf of Mexico.

A new NASA satellite photo shows the extent of the growing oil slick in the Gulf, the ASTER image covers an area measuring 79.1 by 103.9 kilometers, about 32 km of the Mississippi Delta.

National Guard helicopters from the United States throw sand bags on the beach west of Grand Isle, Louisiana, in an attempt to protect delicate wetlands from the oil slick that is approaching.

There are 13 000 officials of BP, government and other companies involved in containment work and attempting to stop the leak. From the initial response to the incident, 120 flights to dump dispersants were made so far, and 97 million barrels, according to BP, were recovered. Just two days after the accident, the company said there were more than 530 vessels in operation, including the C-130 Hercules aircraft pouring dispersants on the affected areas.

The total length of barrier buoys thrown overboard to try to prevent oil from reaching the coast is, so far, 1.2 million feet, more than 400,000 feet of buffer for immediate use.

The pre-salt layer in Brazil is imagined to lie in a much greater depth, 300 km from the coast, and the cost of any eventual similar accident would be vast. Oh, it is fit to ask, time to put a hand in the pocket: the royalty serves to compensate the losses, but states would bear the incalculable costs? It would be very prudent for the government create a substantial contingency fund for a similar event.

In fact, such a great distance from the coast, it's not possible to speak in the States, but in Brazilian territorial waters, and point.