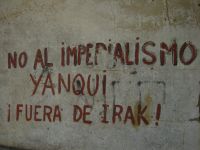 Why is it inviting to have the fox guard the henhouse? Although a really popular Brazilian government could actually be able to maintain a balance between collaborating militarily with the U.S. and keeping the integrity of the country's future, it is now more questionable as, say, the PSDB.

Even a truly popular Brazilian government risks a military collaboration with the U.S. which now seems to me to outweigh the benefits. This is given the fact that an Obama administration in all probability sooner or later will be replaced by one that more closely matches the historical U.S.factors, in other words, a kind of neocon government. Also you never know what kind of government or economic interests that will be possible to give the cards in Brazil.

The U.S. is decidedly in a phase of political and economic decay. When one sees the U.S. as an absolutely invincible world power a great error is being committed. In analysis, those that only see the greatest military power forget to take into account the colossus is sustained on clay feet , namely: - [1]

The American economic decline relative to the emergent powers,and the great de-industrialization and financialization of the American economy. [2] Here too, the precarious situation of the dollar as reserve currency for international economic transactions adds to the vulnerability of countries "supporting the super-power," one of the foundations of American power on beside military force. [3]

The strong U.S. military predominance in the world is unfortunately supported by the power of the international media that is essentially in the hands of Americans preventing an awareness of the problem by the world's population. [4] U.S. military strength, even though relying on the push by the international media, is also accompanied by the great economic weakness in the U.S.. An eventual recovery, judging by the probabilities is not to be counted on, or be credited with confidence. The astronomical debts of the country and the relations of these with the American gross domestic product - GDP - discourage such an optimistic judgement.

The great emerging economic potentials in many current cases de-facto and of strategic importance in the global economy has surpassed by far in terms of markets and U.S. industrial production. The big emerging powers also join older ones that have never reached a place in the sun for themselves in the historical and global political situation, keeping in the shadow of the colossus with clay feet. The Colossus that today threatens them with suffocation if not with smashing itself with its final fall, taking them and those who associate with them to a last glimpse of power and dominance.

The weaknesses endemic North American also can highlight the following equation: x 5% = 20% followed by the comprehensive set of 50%. The terms of the mean equation and note that it is very important: A U.S. is as few as 5% of world population, spending on war production more than 50% of the total war spending worldwide. Alone, the U.S. spends more on war-related activities than all other countries in the world - together. And 20% is what they represent in terms of GDP - gross domestic product worldwide. [5]

This weakness is explained in precise mathematical terms. Add to this the arrogance and ostentation to what might be added the following information: The United States has 2% of global energy reserves that can be compared with 65% of the Middle East, where Iran has only 10% of those 65. A point to investigate is the exact level of energy consumption in the United States. In x of the equation is found the explanation of why Iraq, Afghanistan, Iran and Syria in mathematical form, so to speak.

If we add an equation y we will find the exact reason for North American military interests in Latin America, that not for one minute do I believe is a remedy for the will to fight: [6] transnational terrorism, narcotics trafficking, the laundering and counterfeiting money or natural disasters that ultimately can always be used, as they did in theory and practice to move their financial interests off.

Fighting radical social movemente and massive migration seems to me to be a good reason to justify the US military presence in Latin America. This, apart from the natural strategic interests linked to access to potable water and other necessary goods required in emergency situations, as per point 6.

A central point to be emphasized is that in the situation above aspects such as combating transnational terrorism, drug trafficking and related, should be within an area of police powers, which in its transnational aspects should be solved through agreements of mutual cooperation among Latin American countries.

Calling U.S. military personnel to solve law enforcement problems throughout Latin America, where they would have on account access to call centers for strategic mobility with the possible use of decisive force in wars with lightning quick mobilization [6] it is, in my opinion, like asking the fox to take over the henhouse. I will not cry when you have not even a hen to tell the story of how it happened.

Already in advance one can conclude that the paradox of U.S. foreign military expansion while in the process of internal economic deterioration would not help the situation in the case studied above, that is a broader military cooperation with the U.S.. Solutions? In addition to solidifying a political position compatible with the exercise of legitimate socio-economic interests in Brazil by conscious popular vote, wait and watch developments in anticipation of them when needed, a very active and far-sighted limiting of the privileges offered to them before they keep our hands and feet tied.

[2] Anna Malm, Wars of fraud and deceits mistakes in www.patrialatina.com.br

[4] Emir Sader - Interview with the Italian philosopher Domenico Losurdo: "Situation in the U.S. is unsustainable in the long run" in www.cartamaior.com.br

* Anna Malm is a correspondent in Latin homeland in Sweden