Looking for a solution of a recent unprecedented for Canadian history parliamentary crisis, the Liberal Party addressed the country’s governor general with a request to appoint the “ aristocrat and his majesty Michael Grant Ignatieff” as an official responsible for forming alternative government. 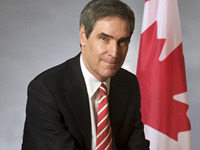 The title sounds somewhat funny. However, it reflects the actual biography of the parliamentary who started his sweeping ascend early last year when the shadow of the world crisis fell on one the crisis-free countries of the planet.

The Russian Canadian widely known in academic circles as an historian and author , Ignatieff held senior academic posts, was a columnist of American and British papers, and now has great connections in Barack Obama’s administration. Canadian newspaper The Globe and Mail reported that their paths crossed in Harvard, where Ignatieff taught and Obama attended as a student. Obama is also familiar with Ignatieff’s books.

Most likely, this politician will be the next Canadian prime minister in 2012. One of the wonderful characteristics of Canadian politics is its predictability. Ignatieff’s role in overcoming of the internal political crisis and the system of the protection of the country against economic crisis he created will not be forgotten by his compatriots in the next two years.

The political crisis broke out in the very end of 2008 when the 40th Canadian parliament has barely started its work. The majority of seats were taken by the Conservative Party that, like most right-wing parties in the West, strives for the minimal role of the government in people’s day-to-day life, low taxes and reduction of the size of the goverment.

As per usual, the conservative majority has formed the government, and competing fractions were waiting for a chance to attack the winners. This chance was presented by Prime Minister Stephen Harper who presented the budget for 2009 that frustrated and united even the worst enemies.

The explosion was followed by an echo. The Liberals accepted the initiative of the New Democrats to create an oppositional coalition uniting liberals, socialists and Bloc Quebecois, Quebec’s separatist movement. The coalition of the three parties was obviously left-winged.

This coalition did not excite the people. First of all, in case of Harper’s resignation the Liberal leader Stephane Dion, the most unpopular leader in the party’s history and generally weak politician, could become Prime Minister.

Second, tactful friendship of liberals and “the red” with separatists became a cause for blaming the liberals in betrayal of the national interests, used by Stephen Harper. He addressed Governor General Michaelle Jean asking him to temporarily dismiss the Parliament. Meanwhile, the majority of the parliament members have already launched the impeachment mechanism. Harper was heard, and Michaelle Jean did just that.

Unemployed parliamentarians stated right away that suspension of the legislative power will not make them drop their plans to oust the Prime Minister. The parties were butting heads. The parliamentary republic found itself without the parliament and with suspended budget amidst the economic crisis that required urgent counter measures. Such measures were suggested by Michael Ignatieff.

Until recently, he was the second person in the Liberal party; however, unpopular Dion has yielded to him in the beginning of the financial crisis. This step was immediately successful – Prime Minister Harper stopped his attack on liberals and offered Ignatieff to become the co-author of the new budget.

Working on the budget, Ignatieff was adamant in providing assistance to low income population, those who lost their jobs, Indians, new immigrants and elderly. The essence of the budget was in active involvement of the government with the economy, which contradicts conservative ideology who call for “borderless market” and deficit-free budget.

Yet, under the pressure of the crisis and in compliance with Ignatieff’s request, conservatives had to return multi-billion dollar deficit to Canada.

In 2009 the deficit amounted to 34 billion dollars, this year it will add another 30 billion. The money is spent on making the lives of the Canadians amidst the global crisis as smooth as possible. The world cataclysm seems to have passed Canada by. To achieve this, the liberals supported the budget and joined the informal coalition with ruling conservatives. A certain dual power came to Canada.

As expected, the peace was temporary. After becoming the official leader of the liberals, Ignatieff rushed to criticize the Prime Minister condemning him for betrayal of the principles of collectivism dear to every Canadian heart.

The struggle continues. Yet, we could suggest that it is likely that the struggle will result in the victory of the liberals headed by Ignatieff in the next election, which will make him the new Prime Minister.

The National Post wrote that if the Bolshevik Revolution had not won in Russia nearly 100 years ago, the Liberal Party leader Michael Ignatieff would have had the official Prince’s title and would probably live in a large mansion given to his ancestors by Ekaterina the Great. The palace where the parliamentarian’s grandmother was born was burnt down in 1917 after Romanov dynasty was overthrown. Ignatieff is convinced that it would be hard for him to be a prince nowadays.

In 1919 Ignatieff's grandparents and their five children fled Russia on a British military ship. Ignatieff ' s father was six at the time . In 1878 they were granted Prince’s title л by Alexander the second.

His grandfather Pavel served as the governor of Kiev and later minister of education in the government of Nikolai the second. In the anticipation of the “Russian revolt", Pavel tried to do everything he could to prevent catastrophic events conducting negotiations with members of Duma, Tsar’s officials and representatives of the military. The initiative was punished.

The Tsar listened to the advice of another minister and decided to fire Ignatieff. Ignatieff proudly resigned himself . It happened a year before the revolution . By the time he left Russia, he had experienced the jail of the new regime and barely avoided being killed.

He had Paris, Great Britain and then Canada ahead of him. In Canada Ignatieff’s grandfather first worked at the construction of railway. Later he became a diplomat. Michael Ignatieff later wrote that his ancestors taught him not to complain and give up when the times are tough but work towards your goals.

He will likely need these lessons on his way to the Prime Minister’s office of the country created by many generations of multilingual immigrants.