North Korean leader Kim Jong-il surprised the world yet again. This time, it had nothing to do with his statements about the country’s nuclear program, his attempts to test new weapons or demands to provide his country with food or fuel. The leader distinguished himself in the theatrical field. 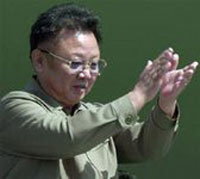 In the past few days Kim Jong-il’s visit to China is widely discussed in East Asia. There are no details available. On May 3, a South Korean agency reported that the leader’s train arrived to a Chinese town bordering North Korea. The train station was surrounded by police and traffic was stopped.

There is no information whether the leader was on the train. Sources from the agency and South Korean and Chinese Ministries of Foreign Affairs clarified that the visit of North Korean leader will take place in the near future. Meticulous journalists kept tracking whereabouts of the mystery train.

On May 4, Chinese media reported that on Sunday a train with a North Korean theater group came to China on the same route as Kim Jong-il’s train. It turns out that a theatrical play based on a Chinese classical novel will be showed on the stage of the Concert Hall of Beijing television on June 6 through 9. The director of the play is Kim Jong-il. Chinese journalists are wondering whether he will visit the premiere. Korean MFA does not provide any comments.

For many, the leader’s love for theater became a revelation. Meanwhile, in June of last year he personally participated in the Russian opera Yevgeny Onegin staged by Beijing conservatory. He came to a rehearsal to instruct the actors.

He thinks that classical opera traditions should be combined with contemporary trends of the 21st century. He thought it would make the play better.

He then talked about political meaning of the event. He praised the actors and directors for staging a foreign opera, saying that the country is on the way to flourishing and the people should have a better understanding of the culture of other countries. The ruling party did well bringing up cultural reserves that have an excellent understanding of political and theatrical goals.

Parades organized by the country in honor of the President’s and his father’s birthdays is also worth mentioning. Those who had a chance to witness the parades say nowhere in the world could you see celebrations on this scale. Without doubts, there is no competition to the leader of North Korea in political theater.

On a second look, there are a few competitors. For example, former Czech Republic President Vaclav Havel started his path to fame as a playwright. Prior to declaring himself a leader of anti-communist opposition, he wrote dozens of theatrical plays still staged in many countries. At age 30, he was a part of the editing committee of Czech theatrical magazine banned by the communist government.

After becoming the President, Havel forgot about his theatrical past and concentrated on supporting the US policy and participating in anti-Russian forums. In 1997, he married the actress Dagmar Veskmova and became the first married current president in the history of Europe. French leader Nicolas Sarkozy and actress Carla Bruni will follow his example only 11 years later.

In Ukraine Kim Jong-il has a “collective competitor,” Verkhovna Rada. Members of Yulia Timoshenko’s Bloc sometimes come to work in white clothes as a sign of political purity and innocence. They also leave their seats as a sign of protest leaving a huge state flag behind. Their opposition from the Party of Regions decorates the halls with anti-NATO posters and balloons.

Italian Prime Minister Silvio Berlusconi is also known as a theater lover. His wife he is currently divorcing is an actress. A few years ago he built an amphitheater at his villa similar to an Ancient Greek one. The fact that he owns several TV channels and Milan soccer club is another proof of his love for theater.

There is an area where Berlusconi outran the North Korean President. He has his own recordings. In 2003, while having Vladimir Putin over for a visit, he sang several Neapolitan songs. The same year a collection of love ballads written by Silvio was released. In 2006 his recordings were released as a self-gift for his 70th birthday.

In the Middle East, the fame of the main theater lover goes to the leader of Libyan revolution Muammar al-Gaddafi. Wherever he goes, he is accompanied by a tent where he lives instead of 5-star hotels. Last fall, while giving a speech at the UN General Assembly, he threw the organization charter on the floor, demonstrating the way the US and its allies treat international norms.

Venezuelan President Hugo Chavez is a born actor. In 2006 he, as later did Gaddafi, shocked the UN General Assembly with his speech saying that George Bush was a devil who “smells like sulpher.” Every week in his TV show “Hello President” he entertains the viewers with his songs, jokes and speeches.

It turns out not all types of art are approved by Chavez. Last year in Caracas some actors tried to open an “Anatomy theater.” No such luck. On the opening day hundreds of policemen were sent to the site to disperse the crowds of spectators. Chavez said he would not allow moral degradation of the Venezuelan society. In North Korea, however, organizers of such event would be given a much more serious punishment than a couple of hits from police.

Politics and theater go hand in hand. Politicians are always somewhat actors and directors. Kim Jong-il theatrical play is another piece of evidence. If he visits the performance it would make for a world political sensation.