Carl Bildt, Sweden's Foreign Minister, wrote in his article in The New York Times on February 2 that as a step in further reduction of nuclear arsenal in Europe he called the US leaders and Russia to support significant reduction of tactic nuclear weapons in Europe. 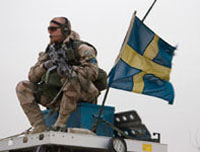 Peaceful initiative is a good thing. Yet, Sweden is a special topic for conversation. This nine million-strong country has an army and military industry that makes any large country envious. Despite the crisis, Sweden’s military expenses are growing as well as the export of military equipment.

Here is the “peace report” for March 2010 alone. On March 12, it was announced that Sweden is to build a Gotland-like submarine, with stealth technology. A week later, information was released that Swedish helicopters AW109 will participate in the operation against Somali pirates. On March 25, the country officials announced that this year they will create a special agency for the export of military equipment and weapons that will combine the work of several companies.

During the cold war Sweden had very active neutrality – it was number ten in the world in weapons export. Not too bad for a small country, but the Scandinavians decided to go even further. According to the Stockholm International Peace Research Institute (SIPRI), in 2004–2007 Sweden was number seven in the world in weapons export and to this day preserves its positions.

In 2007, the export accounted for 1.9 billion dollars. In 2008 it dropped down to staggering 1.41 billion dollars but a year later increased again by 7% and exceeded 1.5 billion dollars. The largest buyers of Swedish weapons are Holland and other EU countries, Pakistan, India, Malaysia, Thailand, South African Republic, and Latin America countries. And, most surprisingly, the US and Great Britain, who have their own strong military industry.

Their army is one of the strongest in the Baltic region. А s of 2007, the number of ground forces is nearly 14 thousand people. They are equipped with tanks, armored vehicles, self-propelled howitzers, and shoulder-fired missiles. Nearly all equipment is locally manufactured.

Air forces have 3,600 people equipped with 165 combat and 102 auxiliary planes and 54 helicopters, half of which is made in Sweden.

Eight thousand officers and sailors serve in the navy that consists of two surface fleets and one submarine fleet. The number of various military ships exceeds 50, and the Navy also boasts five submarines. One of six Swedish navy bases is located some 300 kilometers from the main base of the Baltic fleet in Kaliningrad.

In January of 2009 Swedish Ministry of Defense announced its readiness to reduce the army by a third, but two months later changed its mind and started growing its military might again. The goal was to make the armed forces more mobile and compliant with current requirements. Additionally, Swedish government was motivated by the analysis of the war in South Ossetia. After that war Scandinavians suspended their cooperation with Russia. What were the conclusions made?

There was a necessity in providing conditions for getting 50 thousand people ready to shoot within a week. The number of battalions with constant combat preparedness was expected to increase from three to eight. Approximately 1,700 military were expected to be involved in international peacekeeping operations, and every each of them was supposed to serve “where and when he is required to.”

That looks like a quite bizarre reduction, isn’t it? The question is, who the Scandinavian military machine is going to fight against and what does the Caucasus war have to do with it?

Sweden is not a part of NATO. However, it does not stop it from developing military cooperation with the alliance. Swedes participated in the program Partnership for Peace. Their weapons manufacturing complies with NATO standards and NATO uses Swedish territory for trainings increasingly more often.

Eastern Europe did similar things while preparing to join NATO. If Sweden joins NATO, it will change the balance of forces in Europe, and not in favor of Russia.

Konstantin Sivkov, first vice president of the Academy of geopolitical issues, shared his comments with Pravda.ru:

“Sweden is a neutral country and it does not stop it from remaining one of the largest manufacturers of weapons in the world. Trading weapons is a very profitable business. It is one of the most profitable legal businesses for countries that have more or less serious military industry.

This country has been a part of the top ten exporters of weapons for a long time. It offers a wide spectrum, from guns to contemporary planes that compete even with the leading American and Russian manufacturers, and combat ships.

Now Sweden is obviously trying to oust Russia as the second weapons exporter after the US in terms of volume. In near future it intends to seize the niche of the market of the former USSR republics, including Georgia. This will help Sweden to gain profits from South Ossetia war, because Georgian Army was defeated with Russian weapons.

Swedes and other foreign weapons manufacturers intend to stress the creation of systems that would allow Georgians and other countries that may have military conflicts with Russia to fight against Russia successfully.

And it is not that Sweden has Russia as one of the main competitors striving for influence in the Baltic region. No, the Swedes have a long standing tradition of neutrality and selling arms to everyone who needs them.

A good example is World War II, when they were selling iron ore to Nazi Germany. It was primarily used for the military industry. At the same time, they supplied arms to the countries of Anti-Hitler coalition. Now Sweden is trying to preserve the same role and gain maximum profit from conflicts without interfering directly.