New York Under Attack: The Show Must Go On 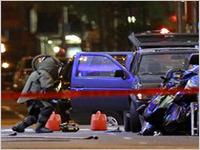 New York Under Attack: The Show Must Go On

A street vendor in this busy tourist hub of the city had seen smoke coming from the vehicle and alerted the New York Police Department, who used a robot to smash the windows of the vehicle and found a clock device, propane tanks, gasoline, a powder and fireworks.

New York City Mayor Michael Bloomberg described the device as “amateurish” but claimed that due to the vigilance of the New Yorkers and the professionalism of the police force, a major incident was averted.

NYPD Commissioner Ray Kelly told the press that “The NYPD bomb squad has rendered safe an improvised car bomb. I think the intent was to cause a significant ball of fire”.

Thousands of tourists were evacuated from the area while the busiest streets of Manhattan Island were closed down. The timing of the incident is significant because it would have created panic among theatre-goers. However, it is reported that most Broadway shows went ahead as planned. Some streets have now been reopened.

The authorities are currently scrutinising security camera footage to verify reports that someone had been seen running away from the vehicle. It would appear that the Nissan was stolen, because the registration plates were taken from a junkyard in Connecticut and had belonged to the owner of a car.

There have been several attempted attacks since the infamous 9/11 terrorist incident. Two Afghan immigrants, Najibullah Zazi and Zarein Ahmedzay, pleaded guilty earlier this year to a plot to explode devices in the New York subway system. In 2009, four New Yorkers were accused of planning to bomb synagogues and fire missiles at aircraft.

Vigilance is the best weapon

This latest incident is a reminder of the deadly times we live in, when decent, hard-working people cannot go out for a meal to relax before going to see a show without fear of being blown up by some demented half-wit with a grudge against society and some pith-headed, foggy fantasy about going to cloud cuckoo land with seventy virgins.

One thing is clear: if these attempts are all from Al Qaeda, then Al Qaeda is reduced to a motley bunch of losers whose terrorist attempts are restricted to the type of device anyone could put together from looking at the Internet. More probably and credibly, Al Qaeda is an ideological base which foments hatred and provides motivation for sad, failed individuals whose only hope to fame and stardom is by insulting the fundamental precepts of Islam, each and every teaching of Mohammed and Allah and through the misfortune of others. It is not a ticket to Paradise, it is the Gateway of Hell.

A terrorist attack is indiscriminate. It does not discern among Jews or Gentiles or Moslems, Arabs or Turks, Greeks or Irish.

However much the authorities make things difficult, however much they eavesdrop, there will always be ways for people to commit such indiscriminate attacks, spreading fear and terror to foster what they perceive as a cause. The difference between Al Qaeda and Islamist Fundamentalism and other terrorist groups over history is crystal clear: while others had a cause, Al Qaeda does not. It is a grayish misnomer for half a dozen crazed and cruel manipulative blasphemers who foster their cowardly aims by using and abusing young people with feeble minds.

As with all terrorist movements, the first line of defence is vigilance, reporting any suspicious-looking object to the authorities and otherwise carrying on with a normal life. Not doing something due to the fear of what might happen is giving terrorists the victory they want. In this, the world stands together because the freedom to move around without the fear of violence is a fundamental and basic human right.