A massive oil leak threatens the Louisiana enirvonment after an explosion and fire on an oil drilling rig about 50 miles off the Louisiana coast, leaving 11 workers missing and presumed dead. The rig sank two days later. The cause of the explosion has not been determined. A riser pipe connecting the rig with an oil well it was drilling bent, broke and fell to the sea floor some 5,000 feet. Oil is now escaping from that pipe at the open end and at two other places, according to BP (British Petroleum). 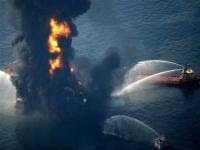 In Baton Rouge, Louisiana, Governor Bobby Jindal declared a state of emergency, saying that the oil slick, which has been spreading perilously closer to shore, “threatens the state’s natural resources.” The spill is being monitored by video images from remote-control submarines. The spill is expected to hit land tomorrow, while it was discovered to be 5 times worse than originally thought as it headed for shore. The leak from the ocean floor proved to be far bigger than initially reported. President Obama is making the services of the Department of Defense available to assist in the clean up effort. Three top officials were sent to Louisiana. BP said the company is willing to accept help from anyone.

Urgent measures are being taken to protect coastal wildlife, including using cannons to scare off birds and employing local shrimpers’ boats as makeshift oil skimmers in the shallows, officials said. Winds and currents in the Gulf have helped crews in recent days as they try to contain the leak.

In a hellish scene, giant flames, an inferno, races across the Gulf of Mexico as thick, black smoke billows into the sky. This is part of a desperate plan being utilized just 20 miles from the Gulf Coast in a last-ditch effort to burn up the oil spill before it washes ashore and causes environmental havoc.

At an area about 30 miles east of the delta of the Mississippi River, a 500-foot boom was to be used to contain several thousand gallons of the thickest oil on the surface, which is then to be towed to a remote area, set on fire, and allowed to burn for an hour. Authorities also said they expect minimal impact on sea turtles and marine mammals in the controlled burn area.

Crews turned to the plan after failing to stop the leak at the spot where the deepwater oil platform exploded and sank. The decision to burn some of the oil came after crews operating submersible robots failed to activate a shut-off device that would halt the flow of oil on the sea bottom 5,000 feet below.

More than two dozen vessels moved into the heart of the oil slick pulling oil-sopping booms. When flames go out after this procedure, the material that is left resembles a hardened ball of tar that can be removed from the water with nets or skimmers. Another option is a dome-like device to cover oil rising to the surface and pump it into container vessels, but that plan will take two weeks to put in place, BP said

About 42,000 gallons of oil a day are leaking into the Gulf from the damaged well drilled by the Deepwater Horizon oil rig. The slick covers an area about 100 miles long and 45 miles across at its widest point. From the air, the thickest parts of the spill resemble rust-colored tentacles of various thicknesses. The air was thick with the acrid smell of petroleum.

"It's premature to say this is catastrophic. I will say this is very serious," said Coast Guard Rear Admiral Mary Landry. But there was anxiety that the Gulf Coast was not prepared for the onslaught of oil and that this spill is developing into a disaster of nighmarish proportions, not seen in decades. Every hour that goes by that BP can't shut down the well, experts are revising their predictions and redefining the worst case scenario. Meanwhile, the spill moves to the mouth of the Mississippi River and towards some of the richest sea life areas.

BP says work will begin as early as Thursday to drill a relief well to relieve pressure at the blowout site, but that could take months. Industry officials say replacing the Deepwater Horizon, owned by Transocean Ltd. and operated by BP, would cost up to $700 million. BP has said its costs for combating the spill are running at $6 million a day. The company said it will spend $100 million to drill the relief well. The Coast Guard has not yet reported what its efforts are costing them.