During the UN Permanent Forum on Indigenous Issues, held in New York, 19-30 April, the reporter on the situation of human rights and fundamental freedoms of indigenous people, James Anaya, received complaints about violations of the right of consultation for indigenous people affected by the hydroelectric plant of Belo Monte (PA) and prospective invasions on the Native Land Yanomami, sent by Hutukara (HAY). 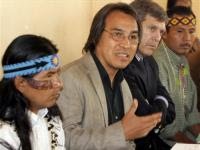 Tuesday, 27 / 4, Anaya responded to complaints considering that the information is relevant to the fulfillment of his mandate. The reporter noted that in urgent situations requiring immediate action, the UN can send a statement to the Brazilian government to ensure the safety of individuals and the community. Additional information can also be requested and recommendations made to the Brazilian State to recognize that indigenous rights are to be respected.

Two events have reaffirmed the importance of the principles and rights contained in the UN Declaration on the Rights of Indigenous Peoples. In one, the New Zealand government, which in 2007 was one of four countries opposed to the declaration, stated its support to this board. Also, the U.S. ambassador, Susan E. Rice, announced the United States is reviewing its position on the acceptance of the declaration. The U.S. government, following the spirit of the declaration, acknowledges that in their country and in other parts of the world the indigenous peoples continue to suffer disproportionately from poverty, environmental degradation, lack of access to health services, violence and discrimination. A committee was established to review the position.

In September 2007, when the declaration was adopted during the UN General Assembly by 143 countries, including Brazil, four voted against: New Zealand, United States, Canada and Australia. Last year, Australia revised its position. Now only Canada remains resolutely against it.

The Declaration is now the most comprehensive international instrument on human rights in the context of indigenous peoples. At the UN General Assembly, Brazil voted for the declaration, formally recognizing the rights of indigenous peoples, while efforts for its implementation are still quite lacking. Especially with regard to right of self-determination (which means the recognition of indigenous autonomy and control over their lives, lands and resources) and the right of consultation. These rights are fundamental to establishing a more egalitarian and respectful relationship between indigenous peoples and national states.

The theme of the 2010 United Nations Permanent Forum is "Indigenous Peoples: Development with Culture and Identity." Representatives nominated by States and civil society, and members of the Forum, present their analyses and reports on the subject around the world. In addition to providing direct dialogue for representatives of indigenous representatives with governments and UN agencies to improve the living conditions of indigenous and cultural protection, the Forum of the UN monitors the implementation of the declaration and assists reporters of human rights in the directions on dealing with violations of indigenous rights.