Russia and Norway have finally reached an agreement over the demarcation of borders in the Arctic Sea. An announcement was made on 27th April by the President of Norway, Jens Stoltenberg, who commented on the conclusions of discussions with the President of the Russian Federation, Dmitry Medvedev. 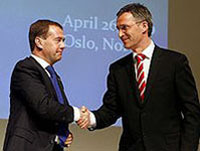 The head of the Scandinavian state acknowledged that this had been “the most important unresolved question between Russia and Norway…we have been discussing this problem for 40 years”. At question are those parts of the ocean area near the border, chiefly the Barents Sea, which covers a total of 175 thousand square kilometers. Attempts to clarify the borders in a way that pleased both Russian and Norwegian parties have, until recently, been unsuccessful.

During the Soviet period, the main reason for this lack of success was the Cold War, with the Norwegian section of the border being a point of particular tension. The “Orion” patrol planes which frequently flouted the border caused our anti-aircraft defenses more than a little trouble.

Hope for a resolution of the dispute did not appear until 2007, when an agreement was signed on the marking of borders in the Varanger Fjord (Variazhskii Gulf of the Barents Sea) between the Rybachii Peninsular (Russian Federation) and the Varanger Peninsular (Norway). However, this is only the southern part of the disputed area, the argument over which has been made particularly fierce by the identification of rich oil and gas deposits. Moreover, its waters are abundant in fish.

Now the long-running conflict has been resolved, opening up extensive opportunities for Russia to work with Norway to realize new projects in the Arctic, including gas extraction. In the words of President Medvedev, “when the final boundaries have been decided, it may turn out that - in order to extract certain deposits - partnership will be required”.

Key in this regard is Russia’s inability to extract petroleum independently, without Norwegian aid, from deep-sea artic sites, due to a lack of essential, unique technology, which Norway possesses, and with the help of which the Norwegian company StatoilHydro, in conjunction with Gazprom and the French Total, exploits the famous Shtokman gas deposit in the Barents Sea.

The two countries’ leaders did not fail to touch upon another important issue during their meeting. As is well known, the USA, Canada, and Denmark also lay claims to the Arctic Shelf; Russia is counting on the mutual support of Norway to defend its interests in the region during the coming sharing out of Arctic riches. According to Medvedev, “in this area our positions are very close; we simply have to help each other, and, perhaps in some instances, to come to an agreement with third countries who occasionally display a genuine interest in having their own presence in this region. It is these third countries which we must be constantly aware of.

"I take as my starting point the fact that fundamental responsibility lies, nonetheless, on us in this regard, as on those countries immediately located in the Arctic region and regarding it as a place for life and for the use of economic possibilities”, the President stressed.

The positive direction that was taken in the meeting had a bearing on yet another issue. As announced by the Norwegian president, Russia and Norway could in the very near future sign an agreement on the abolition of visas for citizens living on the borders of the two countries. Oslo is interested in the additional workforce from Russia, with Norwegian authorities ever more frequently attracting Northern Russian citizens to work in Norway in recent times. In this connection, a simplification of the procedures for obtaining a visa was suggested.

Natalia Antiushina, the head of scientific employees at the Centre of Countries of Northern Europe, RAN, believes that it is not incidental that it is precisely now that the solution to the problem of many decades has been found. As she commented to “Pravda.ru”, “the signing of the agreement was made possible by the fact that in Norway the left “red-green’ coalition is in power, which, unlike the right, considers partnership with Russia to be of great importance. This partnership is, after all, already developing in the North of our country, and with much success. You only have to note our partnership with the large Norwegian gas company “StatoilHydro” in the exploitation of petroleum deposits in the Barents Sea. Or Russia’s use of Norwegian gas transportation capabilities to export fuel to the UK.

Concluding her comments, Natalia Antiushina said: “For the Russian North, the agreements reached today are extremely important, especially given the fact that, as Arctic ices thaw, a significant part of the Arctic Ocean could become suitable for development.”

Prospects for cooperation in the field of fishing remain extremely promising, although there continue to be some complications. Stoltenberg spoke positively of the character of current cooperation in this area, thanks to which a number of existing problems have been successfully resolved. Here, he was referring to the agreement already in place on quotas for fishing in the Barents Sea, which, along with the corresponding regulatory services, have allowed the extensive, often damaging fishing of the northern latitudes (in which both Russian and Norwegian citizens, as well as those of several other counties, are involved) to be limited. In his turn, the Russian president also expressed hope that the signing of a boundary agreement would allow our fishermen to “feel more comfortable and more protected”.

Here it is relevant to mention the detention of Russian fishing vessels which, until recently, has been a regular occurrence, incidents taking place with particular frequency in the area surrounding Spitzbergen archipelago. According to the Paris Agreement of 1920, this is Norwegian territory, but Russia has the right to engage in economic activities there, including fishing.

In 1977, however, in violation of this agreement, Norway extended its fish preservation zone from 3 to 200 miles, changes which Russia does not recognize, and which have therefore led to the detention of our vessels. By 2008, the situation had become so bitter that our country was forced to dispatch naval vessels to Spitzenberg. Now, though, in view of the new directions evident in today’s agreement, hope has appeared that this problem, too, will soon be resolved.