So much for Brazil’s independent stance. The Defense Cooperation Agreement forced upon Brasilia by Washington on April 12 spells out the assimilation of Brazil and once and for all the end of any flirting with Russia over massive arms sales, despite the fact that Brazilian Air Force officers prefer Russian combat aircraft. 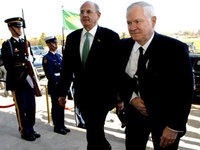 As predicted in this column on February 11 this year, Uncle Sam is indeed interfering in Brazil. Despite the fact that Brazilian Air Force officers have repeatedly claimed that they prefer the Sukhoi SU-35 BM, as we stated, “Arms sales provide security and protection for the customer while joint projects create jobs and stimulate the economies of the buyer and seller. For the seller, maintenance contracts and training provide a welcome open door to further strengthening of economic and cultural ties further downstream” (1).

“What is strange in Brazil is the fact that Pravda.Ru sources have indicated that the vast majority of the FAB (Brazilian Air Force) pilots and strategists favour investment in Russia's fantastic platform of airborne equipment, such as the light super-fighter Yakovlev YAK-130, excellent for training programs and patrol operations with its lower purchase and maintenance costs. Also, the Sukhoi T-50 is the only Fifth-generation fighter that can be compared to the US F-22 Raptor. And why was the Sukhoi SU-35BM, which the FAB preferred, excluded from the Brazilian FX-2 Program?

“What is the Chief of the FAB Brigadier Junio Sato playing at? Why in his FX-2 re-equipment program for the Brazilian Air Force is he toying with the Swedish Gripen and the French Rafale aircraft? Is someone influencing Brazil not to buy Russian equipment? And what is Junio Sato to state next, that the Sukhoi does not correspond to the norms and procedures of the Brazilian Government? (2)”

Now we know. On April 12, Brazil’s Defense Minister, Nelson Jobim, obediently arrived in Washington and penned his signature to the Defense Cooperation Agreement thrust in front of him by US Defense Secretary Robert Gates.

The eight articles of this agreement confirm that Brazil is de facto the latest Latin American country to become assimilated, after Columbia. The agreement includes the following areas:

Cooperation in research and development projects, “the acquisition of defense products and services” (ominously), the exchange of information,, Brazilian involvement in international peacekeeping operations, joint military exercises and among many other things, naval ship visits.

So the Brazilian Government signs this treaty linking its Defense Policy to Washington, whoever wins the forthcoming election. Did the Brazilian population sanction this agreement? If not, how Constitutional is it?