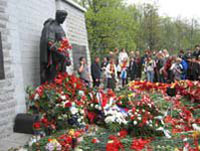 The 26th April marks the three year anniversary of the relocation of "The Bronze Soldier" by Estonian authorities. Until this time, the memorial had stood in the centre of Tallinn next to a commemorative burial site of Soviet soldiers. The explanation offered for its dismantlement was that it symbolized 'Soviet occupation'.

Russian-speaking inhabitants of the republic reacted with acts of civil disobedience, and violent clashes with the police resulted in many casualties. The broader consequence was a severe worsening of Russo-Estonian relations. What is the current relationship of these two countries?

"Relations between the two countries have barely improved', the head of the Baltic sector of the Institute of Countries of CIS and the Baltics, Mikhail Aleksandrov, told Pravda.ru. "Rather, the opposite has occurred, given the fact that Estonian powers, in essence, supported the actions of Georgia during the war in August 2008. Why?

The fact of the matter is that the Estonian leadership intentionally sought to aggravate mutual relations, openly engineering conflict with Russia with the goal of maintaining tension between the country’s two largest communities, Russian and Estonian.”

"Why did they feel this was necessary?"

"The fact is that nationalists are in power in Estonia. Their strategic goal is to prevent integration between the Russians and the Estonians, a goal they pursue through the fomentation of inter-national passions – among other things, exploiting the myth of the 'Russian Menace'.

"Given that representatives of the community evaluate the events of World War Two in different ways, achieving the desired result was not exactly different. This plot of the nationalists sitting in power in Estonia was completely successful; the rift observed between the two communities after the clashes at the end of April 2007 will continue to make itself felt for some time.

"It’s no secret that the Estonian leadership has already long been openly trampling on the interests of the Russian minority. But why do the democratic countries of the West, including the USA, turn a blind eye to this?

"The situation in Estonia cannot be regarded separately from that in the other Baltic countries, Latvia and Lithuania. At the beginning of the 1990s, a political elite which was advantageous to Western countries, and above all to the USA, was placed in charge of these countries. Their ideology was overtly nationalistic and Russo-phobic. Such a choice was not incidental: Washington was, then, still banking on a confrontation with Russia. The political elite of the Baltic States successfully fulfilled this function. In turn, the provocation of conflict with Russia allowed these pro-American 'Quislings' to whip up nationalist passions, and it is owing to this that they were able to remain in power. If these Estonians were to gradually move closer to the Russians living here, then they would choose their leaders according to their actual actions - the nationalists would be left out in the cold."

"The Baltic States, then, including Estonia, have once and for all become mainstays of the West?"

"It’s a unnatural union which is highly unlikely to be able to continue for long. After all, historically speaking, both in terms of the economy and of cultural relations, the Baltic States have been drawn towards Russia, and not the West. In those periods when they have been included in Western civilization, the Baltic peoples have played an unenviable role. They were under the power of the Germans and the Swedes, both of whom literally regarded their land as nothing more than colonies, and a launching ground for aggression against Russia. Now, having entered the EC and NATO, they find, firstly, that they are pushed to the background here and, secondly, that their lives have not in any way changed for the better."

"But according to the opinion of a number of experts, out of all the countries of the former USSR, it is precisely the Baltic States which have achieved the most successes."

"At the beginning of the 1990s it really did seem that way. Latvia, Lithuania and Estonia did indeed make a much better start on their road as independent states than the remaining former Soviet republics. However, this was, to a significant degree, driven by capacities already laid in the countries during Soviet times. After all, the further behind they left Soviet times, the worse their economies became.

"Now though, in this period of crisis, it is obvious that the governments of the Baltic States are having a much harder time than the majority of the other former Soviet republics – and the West is not hurrying to their aid.

"This belies the fact that their economic growth is simply not possible without the involvement of Russia, who they are already tied up with in many ways. However, the current nationalist leadership of Latvia and Estonia is not capable of improving relations with us. This is, among other things, due to the fact that such a situation of tension is beneficial for certain individuals on the other side of the ocean – just as it was previously. Yet, I'll say once more, they are not in a position to improve their economy independently. The only thing they are currently succeeding in is arguing with Russia, who, as the example of Estonia after the events at the end of April 2007 shows, they would do better to be friends with.

"Today this country is one of Europe’s outsiders. The economic collapse hit her badly. The only solution the local political elite offer is entering the Euro zone, which would be an extremely doubtful step in the current circumstances; many economists are saying that the system built on the Euro is beginning to crumble. Moreover, the idea of entering the Euro zone was only alighted upon as a way to deceive society, as a move capable of, for a short time, drowning out growing rumbles of dissatisfaction.”

"You’re referencing the effect of the economic sanctions introduced by Russia after the dismantlement of 'The Bronze Soldier'?"

"Unfortunately these weren’t the full-scale sanctions which would have led to a complete cessation of trade and economic relations with Estonia. The so-called 'Petersburg' lobby, acting on behalf of businessmen from Saint Petersburg, prevented the introduction of such sanctions; this same lobby previously set up many economic projects in Estonia. In this respect, their interests diverge from the national interests of the country.

"But even those measures which were taken, including the diversion of transit flows from Estonian territory to other routes, had a significant effect. This showed conclusively that it is Estonia who needs Russia, and not the other way around. As a result, fairly serious recession was experienced in a number of sectors of the Estonian economy. This example makes glaringly clear that it is better to be friends with Russia. And until these countries improve relations with her, they will remain in the pitiful situation in which they currently find themselves.”

"Do you have the impression that this is far from being understood by everyone in Estonia?"

"It goes without saying that Baltic people of every kind are striving to get our business to return there and actively develop. But I am categorically opposed to attempts to smooth over relations with Baltic States through their economies – by means of, for example, the provision of trade preferences. I do not agree with that part of our political elite which argues that it can use economic influence to change the political agenda of these countries.

"Practice shows that this is far from always being effective. It should be remembered that we tried to set up various economic projects in Georgia – and what did we get? Our priority should be to strive to influence a shift in the political agenda. And only after achieving political successes can we move economic projects there forward – not the other way around."

"But won’t this reflect badly on the reputation of Russia? And is it actually possible to achieve the desired result by such means?"

"In situations of necessity, even the 'most democratic' country in the world resorts to similar measures – I remind you that, during the period of the USSR, America prohibited the importation of advanced technology to Russia, and severely penalized those companies which flouted these bans. One of the most scandalous stories was that of the Japanese firms who provided the Soviet Union with machinery for the production of screws for submarines. Extremely severe measures were taken against these companies in the USA, right up to not allowing their products onto American soil. We could use this means far more effectively to develop a political dialogue in the Baltic, to reduce suppression of the Russian-speaking population, and to change the Russo-phobic policy of Tallinn."