The Republic of Kyrgyzstan is teetering on the edge of a very dangerous situation. Mob rule has set in amid a breakdown of law and order, as murdering gangs of criminals go on the rampage against ethnic Russians and Turks. Kyrgyzstan, with its 80 different ethnic groups, an apparent absence of Government and a planned uprising in the south, is very much a volcano waiting to erupt. 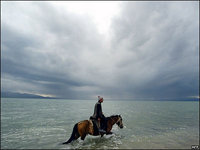 Ten days after riots in Bishkek forced the ex-President of Kyrgyzstan, Kurmanbek Bakiev to flee to his homeland in Jalalabad (and subsequently into exile outside the country last Friday), a fresh surge of unrest has left several people dead and scores injured, including ethnic Russians and Meskhetian Turks as political unrest has led to ethnic violence.

While Bakiev’s supporters are rallying in Jalalabad and warning that they plan an uprising to replace the ex-President, the Interim Government has been criticised for indecisive action while marauding gangs of ruffians seize properties from ethnic minorities.

The unrest broke out on Monday in Leninskoye district, where local Meskhetian Turks were savagely beaten by enraged Kyrgyz nationals and their crops were torched. This spread to Mayevka, on the outskirts of Bishkek (the capital) where armed mobs seized land belonging to ethnic Russians, before moving on into the capital.

The Mayor of Bishkek, Isa Omurkulov, met the rioters and promised, in writing, to register the plots of land that had been seized in the names of the raiders, after which they dispersed.

South near to open insurrection

Meanwhile, Faizulla Rakhmanov, the self-proclaimed Governor of Jalalabad, Bakiev’s stronghold, declared at a rally on Monday that “we will soon move against the interim Government and restore Bakiev’s rule”. With weakened State institutions and an Interim Government which is seen by many to be repeating the same nepotistic policies of the ousted Bakiev, there is a growing feeling that now is the time for people to grab what they can get.

The growing disagreements among the people constituting the Interim Government is giving rise to growing instability. For example, the police strike on Monday when the unpopular Bolot Sherniyazov was appointed Interior Minister (he had led riots against the police earlier this month in Talas). After demanding better conditions for the service and the removal of Sherniyazov, the Government did a U-turn, and replaced him with career police officer Bakyt Alymbekov, at which the police force called off the strike.

While Moscow was quick to offer aid and assistance to the new Interim Government, it is clear that such assistance can only be rendered in an environment which is politically stable and devoid of ethnic violence. With an Interim Government full of political protagonists, each one with his own ambitions and agenda and a north/south divide, with 80 different ethnic groups, Kyrgyzstan has all the ingredients for disaster, a geo-political volcano waiting to blow.

Moreover, with the majority of the country Moslem, is this another front to the War on Terror about to open?