Celebrations have been taking place in the Venezuelan capital, Caracas, to mark the country's 200 year of independence. 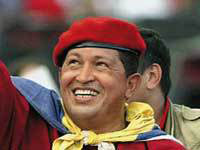 A large parade included 6.5 thousand military and 5 thousand from different groups from across Venezuelan society.

The celebrations commemorated April 19, 1810, when the municipal council of Caracas first led a successful movement to depose the Spanish colonizers. This led to the founding of the First Republic of Venezuela, with the overthrow of Spanish colonial authorities and the establishment of the country’s first independent government. The central role in the fight for the independence of Latin American country was played by Venezuelan independence fighter Simon Bolivar born in Caracas.

Bolívar participated in the foundation of the first union of independent nations in Latin America. He was critical of the US that tried to interfere with his continent 200 years ago. “Americans from the North are not our brothers,” he used to say. His idea is supported by Hugo Chavez who is considered to be the main critic of Washington in the Western hemisphere.

On April 18, on the eve of the celebration, Venezuelan media broadcast the address of the country’s leader officially named “lines of Chavez.” "A new, decisive and final cycle in the Venezuelan history" has started, Venezuela's President Hugo Chávez said on Sunday night. Between 2010 and 2030, "the socialist revolution, full independence and unity of the peoples of Latin America and the Caribbean" will nail down, he added.

The memorable day was marked with a grand parade the country has not seen for a long time. The parade started off with the march of thousands of athletes and activists from all parts of the country. Participants wore red revolutionary T-shirts and carried Venezuelan flags. Many held signs “Socialist motherland or death!” and “We will win!”

The parade was continued by the military. Their march lasted four hours and was represented by all troops’ branches. The spectators were excited to see helicopters Mi-35, Mi-26, Mi-17, and multi-purpose fighter Su-30.

Military from many countries took part in the parade. Latin America was represented by main Venezuelan allies – Cuba, Bolivia, Ecuador, and Nicaragua. Argentina, Uruguay, Guatemala and Virgin islands also sent their military. Other continents were represented by Libya, Algeria, and, interestingly, Belarus.

Chavez was visited by the leaders of the governments of Argentina, Cuba, Nicaragua, Bolivia, Ecuador, Dominican Republic, Antigua and Barbuda, Barbados, Saint Vincent and Grenadine. All guests gave speeches, but the most eloquent was the one given by the host.

Chavez appeared in public accompanied by President Raul Castro from Cuba and President Evo Morales from Bolivia. First several generals climbed the stands and praised revolutionary changes ongoing in the country. Then, traditionally for all well-rehearsed events, the host spoke.

“We are here together as one: civilians and soldiers united ... the people and its Armed Force guaranteeing Venezuelan independence," he said.

Venezuelan President criticizes American policy nearly in every address broadcast to other countries. He was loyal to his principles this time: “This is the century of our America, of the liberation of our peoples, of the consolidation of our independence…never again will Venezuela be a Yankee colony,” he declared.

The summit of the Bolivarian Alliance for the Americas (ALBA) will be held today in the Venezuelan capital Caracas. The members of ALBA are the countries that are the least amicable towards the US – Venezuela, Cuba, Nicaragua, Bolivia, Ecuador, Dominican Republic, Antigua and Barbuda, Saint Vincent and Grenadine.

It seems that Hugo Chavez once again demonstrated his intentions to oppose the US attempts to establish influence in the region. He did it again in his usual extravagant way. May be this is why there is no reaction from Washington regarding his statement about “Yankee colony.”