The Argentine vice president is indicted for abuse of authority and misconduct. Argentine Vice President Julio Cobos, was criminally indicted yesterday (19 / 4) by two lawyers in the country, accusing him of "abuse of authority" and "breach of his duties as public servant." 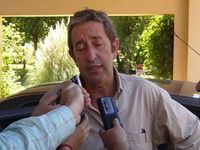 Lawyers Liurgo Edgardo Antonio and Gustavo Darío Liurgo [father and son] still ask for "psychological and psychiatric expertise" and argue that Cobos has dictated "resolutions or orders contrary to the constitution and laws."

Elected vice president next to Cristina Kirchner in 2007, Cobos left the allied base and went into the opposition in recent months. Since then he has been one of the main characters in political debates to confront the government in the role of leader of the Senate, barring the administration of president.

Cobos was the one, for example, who in 2008 knocked down a bill in the Senate Executive. Entitled to a vote of Minerva, he vetoed one of the most important proposals of the season, which aimed to increase taxes on exports of the agricultural sector.

The government, in turn, denies that it is promoting a campaign against the deputy, taking away the chair of the Senate. But he does not hide his dissatisfaction. "Cobos became leader of the opposition," he said to the Interior Minister Florencio Randazzo.

However, there was inevitable speculation and innuendo in the press since before the filing of the complaint, the chief of staff, Aníbal Fernández, warned that "anyone" could denounce him, still confirming the accusation that Cobos is a traitor." .