On the 18th April the funeral of the Polish president Lech Kaczynski and his wife Maria, killed in the plane crash near Smolensk, took place in Krakow. Hundreds of thousands watched the mourning ceremony, along with the heads of dozens of governments and states who came to bid farewell to the Polish leader. Dmitry Medvedev headed the Russian delegation. 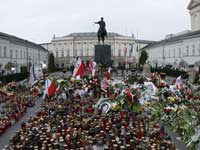 Lech Kaczynski was an extremely prominent figure not only on the national, but also on the world, political stage. During his time in office he provoked controversial reactions both in Poland and beyond her borders.

In many respects his fellow citizens were at one with their president. As fervent Catholics, the majority of Poles took a hostile view of the holding of gay parades in their country and the legalization of single-sex marriage. As such, when Lech Kaczynski spoke out against such things in harsh terms, the reaction of the Polish population was sympathetic. The touching relationship between their leader and his wife was also widely admired.

There were, however, also things which displeased the great majority of the population. We only have to recall the appointment of his twin-brother Yaroslav Kaczynski to the post of prime-minister.  Or the endless court case of Poland’s last communist leader, Wojciech Jaruzelski, which even the Poles themselves compare to a middle-age “witch hunt”.

On the economic front, Poland has been unable to catch up with the more developed European countries. Whilst the country cannot be expected to catch up with a country such as Germany, basic indexes reveal that she has not even been able to draw even with the Czech Republic. Millions of Polish citizens emigrated to Western Europe to earn money before Kaczynski came to power – and remained there doing so during his tenancy. It is unsurprising that the late head of state was not a favorite in the run-up to this year’s presidential elections.

A significant element of Poles’ grievances concerned Kaczynski’s very unique approach to foreign policy. Experts Sergei Markov and Aleksandr Rar share their thoughts on this, as well as the future development of Russo-Polish relations, with Pravda.ru.

“I must admit to being unimpressed by the results of Kaczynski’s foreign policy. He dreamed of making Poland a great nation, with about the same influence as Germany, France and Great Britain. To this end he elected to conduct a string of endless conflicts with Russia – and in the end gained nothing. Under Kaczynski, Poland, in actual fact, found itself in diplomatic isolation.

Kaczynski became famous as a euro-sceptic, coming into conflict not only with Russia, but also with the EU. He delayed the processes of integration with Europe, in general behaving in an unconventional way for modern politics. In Europe, both the president himself, and his country, began to be perceived as a capricious young woman, eternally dissatisfied with everything. Her endless attempts to profit from historical questions was met with incomprehension in Brussels, whilst in the EC dissatisfaction with Poland’s extremely anti-Russian agenda was expressed more than once.

The deceased president dreamt of turning his country into a great power. He very much wanted Poland to be responsible for the whole of the EU’s policy in the East. But these plans were frustrated. The Orange Revolution in the Ukraine, which was vehemently supported by Warsaw, came to an ignominious end. Attempts to dislodge Lukashenko, the leader of Belarus so disliked by Poles, came to nothing. They thought they could use their Slavic neighbors to the East against Russia. Nothing came of it.

What did Poland achieve through just such attempts to profit on Katyn, through the desire to site parts of the American anti-missile defense, or the support of the Georgian president Mikhail Saakashvili? That the “Nord Stream” gas pipe line was laid on the bottom of the Baltic Sea in a bypass of her territory. In view of the endless Russophobe antics of the Polish leadership, Russia and countries of Western Europe needed reliable guarantees that fuel would reach consumers: another cost of president Kaczynski’s agenda.

It is probable that after the tragedy near Smolensk, Russo-Polish relations will improve. In general, Russia has large problems with only five EC countries. The most difficult situation is with Latvia and Estonia, where the rights of the Russian speaking population are harshly trampled upon, and where, instead of democracy, an ethnocracy and a police state exist. Things with Latvia and Romania are somewhat simpler –although in this area, too, there are problems. And now, probably, so things will be with Poland.

Endeavors to improve Russo-Polish relations are demonstrated by the Poles themselves. We recall that the current Prime Minister Donald Tusk won the parliamentary elections of 2007 on the promise of setting in motion a dialogue with Russia. Negotiations may not be without their complications, but they are at least underway, and support for his line on Russo-polish dialogue is expressed by the general public in Poland.

There are also external factors working in favor of an improvement of bilateral relations. Poland, for example, is a member of the European Union, which took the policy of a dialogue, rather than confrontation, with Russia after the war in South Ossetia. Furthermore, the previous administration of the USA used to nudge the Poles to endless grievances against us. But now the Barack Obama administration, which has a better attitude towards Russia than its predecessors, has replaced George Bush and Richard Cheney. As a result, there is no longer anyone to stir up the Poles.

Finally, Russia itself has done a great deal. We only need to recall the way in which Vladimir Putin and Donald Tusk recently joined in prayer at Katyn. After the accident itself, too, the Russian leadership conducted itself almost impeccably.

Yes, historical grievances will not disappear. Yes, a huge portion of the Polish elite will continue, as before, to be guided exclusively by USA. Yes, the dialogue will not run smoothly. But, after the tragedy with Lech Kaczynski, all the conditions for an improvement of Russo-polish relations have been created.

Alexander Rar, director of the Centre of Russia-Eurasian Advice on foreign policy of the FRG:

“Lech Kaczynski was a very unique politician, the sort of tough nut not found amongst European bureaucrats. He always fought for the interests of Poland, constantly over-emphasizing them, and for this reason he found it hard to fit into a wider European context. It was exactly due to this stubbornness, and these ambitions to win special privileges for Warsaw, that negotiations about the European Constitution dragged on for such a long time.

In addition, Kaczynski perceived Poland’s involvement in western institutions, including NATO, more as military protection from Russia. He acted and thought in the terms of the cold war, like a man of the past, perceiving the Russian Federation as a country hostile to Poland. He was one of the main proponents of the idea of curbing your country, constantly coming forward with anti-Russian ideas – from the placement of parts of the American missile defense on his territory to the inclusion in NATO of Georgia and Ukraine.

In doing so he expressed the ideas of that radical part of Polish society which is ill-disposed towards Russia. This caused great harm to Poland. For her president began to reflect these moods in reality, to the detriment of relations with Russia.

He constantly sold himself as a Christian politician who was striving for the revival of Christian values in Europe. But regardless of his Christian position, his behavior was far from always being that of a real Christian, capable of overcoming pride and enmity towards others, including Russia. Kaczynski couldn’t – and did not want to - negotiate with her. Moreover, whenever he traveled to Russia, he demonstrated a disinclination to meet with the Russian leadership, an attitude which further deepened the existing problems in relations between the two countries.

He really did live by the terms of the war, and this not only in relation to Russia, managing to evoke a negative reaction from Poland’s European neighbors, too, through such an attitude. The head of Poland was, for example, notable for declarations such as: “Germans should pay more than other EC countries into the European funds because they started the war”.

But that which occurred on 10th April near Smolensk is just impossible to believe. Lech Kaczynski wanted to bow to the Katyn graves and died in that exact spot, in this place which is now twice as awful for Poles. We cannot speak too harshly of him after his death, but, no matter what, he was a real Polish patriot.