The Nuclear Security Summit ended in Washington on April 13. The leader of 47 countries, including Russia’s Medvedev, attended the event. The participants of the summit supported Barack Obama’s initiative to guarantee security for vulnerable nuclear materials. Many countries, such as India, Italy, China and Japan, announced their intention to establish additional centers to deal with the problem. 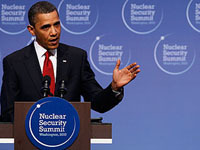 Russia set forth a number of landmark initiatives too. Dmitry Medvedev said that Russia was ready to shut down the only reactor producing weapons-grade plutonium. Barack Obama praised Russia’s efforts saying that Russia was taking a real action to provide nuclear security in the world.

Russia’s Foreign Minister Sergey Lavrov and his US counterpart Hillary Clinton signed an additional protocol to the previously signed agreement (of 2000) about the utilization of excessive reserves of weapons-grade plutonium.

“As for further reduction of nuclear offensive potentials, we are ready for it,” Medvedev said after the summit in Washington ended.

The members of the summit discussed the issue connected with the rogue states, which refuse to observe the Non-Proliferation Treaty – Iran and North Korea, first and foremost. Obama said on behalf of other leaders participating in the summit that those countries could face the danger of total isolation. The international community is still ready for dialogue, but, as Obama said, new and tougher sanctions against Iran were quite possible.

Dmitry Medvedev did not exclude sanctions against Iran either. “Iran creates certain problems. The most important thing now is to see what its nuclear program is like. Unfortunately, Iran either ignores other countries’ questions or responds with abstract statements. I would definitely not like new sanctions to be approved, although it may happen that the sanctions are inevitable,” Medvedev said.

French President Nicolas Sarkozy emotionally supported his Russian counterpart. Sarkozy put forward an initiative to establish special tribunals to punish the countries which hand over their nuclear technologies to terrorists.

The members of the summit said that the nuclear security regime must not violate the right to use nuclear power in peaceful purposes.

Canada , Mexico and Chile decided to refuse from their reserves of highly-enriched uranium. Ukraine is ready to join these countries at this point as well.

The next conference on the subject of nuclear security will take place in 2012 in South Korea.

However, Alexander Khramchikhin, deputy director of the Institute of Political and Military Analysis, does not think that there are reasons to praise the summit in Washington.

“The summit has not solved any important problem. Such events are nothing but talking, and the recent summit has proved it yet again. Officials from those countries, which violate the nuclear non-proliferation regime, ignored the meeting. What kind of nuclear security can we talk about after that?” the expert said.

In addition to world’s five nuclear powers, nuclear weapons exist in Israel, India, Pakistan and North Korea. The first three of these countries did not receive much attention at the summit for some reason. Egypt and Turkey accused Israel of possessing nuclear arms prior to the summit and urged the international community to deal with the issue. The US president showed a strange reaction to that. On the one hand, Obama stated that Israel must join the Nuclear Non-Proliferation Treaty, but on the other hand, the US president simply refused to comment the Israeli nuclear program.

Vladimir Khrustalev, a nuclear technologies expert, told Pravda.Ru that the members of the summit agreed to establish tougher control over the storage and movement of nuclear materials on the post-Soviet space, first and foremost.

“The US administration will also have to soften the nation’s nuclear strategy. As a matter of fact, the subject of deterrence of nuclear proliferation, discussed at the summit in Washington, was created by Washington. I’m talking about the USA’s foreign politics before Obama . For example, George W. Bush used the issue of non-proliferation to attack Iraq. As a result, the USA triggered nuclear crises in the countries, which America openly threatened to attack. North Korea was forced to pull out from the Nuclear Non-Proliferation Treaty.

“The recent summit has not solved another key problem. It is highly important to pay attention to other issues rather than to the availability of nuclear technologies for terrorists. Brazil, for instance, has to restrict access to its nuclear objects for IAEA’s experts to exclude a possibility of industrial espionage. There are reasons for that indeed. The data of IAEA inspections, which Iran provides in accordance with bilateral treaties, transpire in the western media on a regular basis in spite of the fact that such information is supposed to be kept secret.

“As for Russia, the decision to shut down the nation’s only reactor producing weapons-grade plutonium will obviously not damage Russia’s defensive capacity at least during the forthcoming five years,” the expert concluded.