Viktor Yushchenko and His Historical Circus

Passions are still running high in Ukraine with regard to the decree by Viktor Yushchenko conferring the title of Hero of Ukraine on Stepan Bandera, the leader of the Organization of Ukrainian Nationalists (OUN). 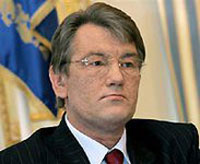 Viktor Yushchenko and His Historical Circus

On April 12 information was released stating that the former President appealed to Donetsk District Administrative Court which repealed his decree. Yushchenko thinks that the judges broke the law.

It took Yushchenko at least a week to prepare for the appeal. On April 6 he called it a cynical decision. “Replication of imperial stamps that hide real heroism, complexity and tragedy of the Ukrainian fate in 20th century behind false pageantry, cause a split rather than unity of the society,” he explained. Lawyers believe that the court action looks more like a clownery rather than a real political event. In fact, Yushchenko cannot appeal as a citizen because the court repealed the decree of the leader of the state, and not the citizen Yushchenko.

On April 2, Donetsk District Administrative Court repealed the decree conferring the title of Hero of Ukraine on Ukrainian nationalist Stepan Bandera. The court substantiated its decision by the fact that Bandera was not a Ukrainian citizen (which is a mandatory condition for conferring the title of a national hero) because he died in 1959, 32 years before the independent Ukrainian state appeared on the maps.

The plaintiff in the case - lawyer Volodymyr Olentsevych - stated that Yushchenko exceeded his authority when issued the notorious decree. The court did not satisfy the appeal and even ordered Yushchenko to pay legal charges to Olentsevych in the amount of 3.4 grivnas.

Stepan Bandera is a controversial figure in the Ukrainian society. The polls indicated that approximately 50% of West Ukraine residents consider him a national hero, and so do 20% of residents of central regions. In the East and South less than 10% of residents agree.

At the same time the absolute majority of residents of the East, South, and even those who earlier voted for Yushchenko, believe that Bandera was a traitor and supporter of Nazi occupants. The facts prove exactly that. There is plenty of evidence indicating close collaboration between Bandera and the Third Reich. It is well known that he fought against the USSR, as well as the fact that Bandera supporters killed hundreds of Poles, Jews and Ukrainians.

Bandera was never a citizen of Ukraine. He was born in the village of Uhryniv Staryi , in the Kalush District of Galiсia , then part of the Austro-Hungarian Empire, and later, Poland (1918-1939). Bandera never came to West Ukraine after it was occupied by the USSR. After World War II he resided in Munich where he was killed in 1959 by a KGB agent.

In the past years nationalistic organizations supporting Yushchenko demanded, against the law, that he makes their idol a national hero. The relevant decree was issued on January 22, five days after Yushchenko was defeated in the first tour of elections. This was his “good-bye” present to his successor.

The reaction was controversial. People all over Ukraine started collecting signatures to repeal the decree. Victor Yanukovich and current deputy prime minister Sergey Tigipko criticized the decree several days after it had been issued.

In February, the Supreme Soviet of the Crimea and Odessa regional council addressed the Ukraine’s Constitutional Court asking to repeal the decree. At the same time, rabbi Moshe Reuven Asman decided to reject the award given to him by Yushchenko as a sign of protest.

The President’s decision was condemned by Russian Ministry of Foreign Affairs. Polish President Lech Kaczynski, who recently died in an airplane crash, made an address in early February stating that he was against heroization of Bandera. He reminded that during World War II 100,000 Poles fell victims of OUN. On February 25, the European Parliament made a resolution calling for the repeal of the decree.

In March, during his meeting with Dmitry Medvedev, Viktor Yanukovych promised to do it as soon as possible. The situation was resolved on April 2 in Donetsk District Administrative Court whose ruling Yanukovych did not appeal, and had to explain himself to pro-nationalistic residents of western regions.

Now it is up to the Court of Appeal, which Yushchenko addressed. We can expect that its decision will not be final. If the ruling of the inferior authorities is cancelled, it will cause frustration among the residents of eastern and southern regions. If it is ruled effective, Yushchenko may go further, up to the Constitutional Court.

The role of Bandera in the country’s history will long remain the topic for political discussion.