Kurmanbek Bakiev, ousted President of Kyrgyzstan, appears to be seeing sense after threatening to unleash a bloodbath. The interim President Roza Otunbaeva, meanwhile, has stated that while Bakiev has the right to protection under the Constitution, his presence in the country is becoming troublesome and questions whether he has not lost his right to immunity. 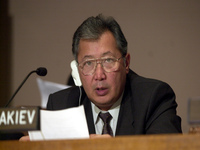 The two positions are becoming clearer after riots on April 7 forced Bakiev to flee to his homeland in the south of the country, where he rallied thousands of his supporters and on April 12, declared “Let them try to catch or kill me. Nobody will be able to justify so much blood”.

However, the ousted President, re-elected in July 2009 in an election process much criticised by monitors, yesterday made the first tentative move towards a negotiated agreement.

Speaking in his home village of Teyit, Jalalabad, he set out his conditions for his resignation, paving the way for the interim authorities to hold a Presidential election within six months.

Asking for a guarantee of personal security for himself and his family, he called for a snap election within two to three months and demanded that “the roaming of these armed people ends in Kyrgyzstan, and that the redistribution of property and this armed free-for-all stops”.

Furthermore, AKIpress reports Aziza Abdrasulova, the Director of the human rights center Kylym Shamy as stating that Bakiev has admitted that “he has no moral right to hold a key post” after the events of April 7.

Mourners continue to gather today to remember the victims of the repression unleashed by the Bakiev regime against the protesters, in which around 80 people were shot dead and hundreds were injured.

With tensions running high, there are mixed signals from Bishkek. The interim President Roza Otunbaeva has issued declarations in the last few days stating that she would offer security guarantees to Kurmanbek Bakiev but not to his family members. The question here is around the term “guarantees” and as to whether this means his physical integrity only or immunity from prosecution on condition that he leave the country.

However she has also been quoted by Rossiya-24 as saying that “We can’t guarantee his safety because what he did deserves serious justice. We are not holding any talks. Public opinion is very negative”.

This question was clarified further today in Ms. Otunbaeva’s Press Statement in Bishkek: “In accordance with the Constitution (he) has immunity but everyone thinks he has stepped out of this immunity”. The interim President reiterated that “The interim Government is not conducting a negotiation process with Kurmanbem Bakiev”. Mentioning “patriots who are willing to go to the South,” she added that Bakiev had already had his chance to leave the country and that “If he falls into our hands he will be prosecuted”.

Ms. Otunbaeva was previously quoted by AP as saying “We will provide security measures which he is entitled to under the Constitution” but also warned that “His stay in Kyrgyzstan is posing a problem for the nation’s future. It is becoming increasingly difficult to guarantee his security as people are demanding to bring him to justice”.

Indeed, Security Minister Azimbek Beknazarov has declared that a criminal investigation has been opened against Bakiev, who has been given a period of time in which to hand himself in to the authorities.

There is a general consensus in Kyrgyzstan that Bakiev has to go, one way or another. His nepotism, appointing his brother and son to ministerial positions and clan members to senior management posts within the country, amid allegations of fraud and corruption, raising commodities prices in the middle of a financial and economic crisis, pushed the people to breaking point.

He may find support in Jalalabad for the time being but the turning point will focus around how long he takes to step down voluntarily (if indeed he still has a negotiated option), how long the interim Government’s patience with him holds out and whether or not he will be held accountable for the millions of dollars he is alleged to have siphoned off. Added to this 80 deaths and hundreds of people shot in the streets, and Bakiev’s position looks bleak.