Iran: Haven’t We Seen This Movie Before?

In the joint interview* with Hillary Clinton and Robert M. Gates on Sunday, the buzz words were all there: international terrorism, Al Qaeda, Iran’s nuclear program, the need for UN Resolutions and the fact that such Resolutions will not stop the USA from taking further action, an international coalition being built, Teheran not wanting to follow the diplomatic path…and Iran was mentioned no less than eighteen times. 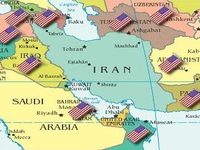 Iran: Haven’t We Seen This Movie Before?

The build-up, ladies and gentlemen, is on. We have seen it before and we are seeing it again. Look at a map of Iran (large photo) and the mechanisms are in place. And now the rhetoric is taking the same path as the run-up to the war in Iraq. Take for example the recent interview (source quoted below) between the NBC’s David Gregory and US Secretary of State Hillary Clinton and US Defense Secretary William Gates on Sunday April 11, 2010.

During the interview, Iran was mentioned, directly or indirectly, no less than 18 times, ten ominously by Defense Secretary Gates (5 directly and five indirectly – “they”, “them”), 6 times by the interviewer and twice by Hillary Clinton.

While there were references to “putting pressure” on Iran and a mix of policies including economic sanctions, the images created by this interview are as telling as they are shocking and frightening: we have all the ingredients present in the verbal and body language of the United States of America visible immediately before the Iraq war.

The manipulation of fear. Ingredients: “nuclear terrorism”, “Al Qaeda” and the next topic? Iran.

Hillary Clinton laid the foundations, the interviewer introduced the feed and Robert M. Gates provided the veneer, a carefully worked out triple-whammy starting with international nuclear terrorism: “The threat of nuclear terrorism has increased” (Clinton); “We know that terrorist groups, primarily Al Qaeda, persist in their efforts to obtain…nuclear material (for a dirty bomb)” (Clinton); “We’re doing everything we can to prevent Iran from developing nuclear weapons” (Gates).

Gratuitous phrases such as these without an iota of foundation or credible sources are no more than scare-mongering so as to lay the cornerstones for a campaign of the manipulation of fear which gives administrations a carte blanche to act as they please, firstly eliminating foreign businesses from any possible tenders (except those chosen carefully from a tidy alliance of friends, the NATO arms lobby), then the move in for the kill and finally the doling out of billionaire contracts to White House cronies. Oh, and slaughter hundreds of thousands of people in the process while another State which cannot fight back is destroyed.

The risk from international nuclear terrorism has always existed since nuclear weapons were created and what better example of nuclear terrorism than Hiroshima or Nagasaki? Let us call a spade a spade. The risk was far higher during the time of the voluntary dissolution of the USSR because materials were being moved around and controls were less easy to exert through a shift in centralization.

As for Al Qaeda, its capacity to act amounts to a few wannabe idiots with sugar and weedkiller type devices, almost out of date, a demented half-wit trying to set his shoes on fire and a Nigerian banker’s son with a desire to have a burning crotch. So from there to rocket science, passing through Iran, does not make much sense and it is frightening that the US Secretaries of State and Defense are speaking as if it did.

Us and Them. We are the good guys, they are the bad guys. See? They don’t wanna play ball.

“We’re probably going to get another Security Council Resolution” (Gates); “The fact that Iran…(has) not responded makes our case” (Clinton); “We stretched out our hand…It was the Iranians who refused” (Clinton).

Melodramatic drivel. We saw how much the USA and its lackeys respect the UNSC, because they only use it to justify their own ends and if the UNSC says no, they press ahead anyway. Under international law, a separate resolution by the UNSC is necessary for any resort to force, and those concerned know it.

The fact that Iran has not responded is not the case, clearly. The Islamic Republic of Iran has met the USA face to face on a number of issues but reiterates that it has the right to a peaceful nuclear program. And now that the USA is so worried about Iran’s nuclear program, how come nobody speaks about Israel’s 200 warheads sitting in the Negev Desert, which (bring out the orchestra) “Israel does not confirm nor deny”. See the smaller picture.

So why is the USA not playing the same tune with Israel? Or is it that the USA is actually controlled by Israel and the epicentre of the USA’s policy-making process is in fact in Tel Aviv?

“As Secretary Gates just said, the Security Council Resolution will not in any way forestall us or the E.U. or other concerned countries from taking additional steps” (Clinton).

As with WMD, the perceived threat from Iran is enough to merit military action

“Weapons are more dangerous than potential. Potential is troubling too” (Clinton); “That (Iran’s nuclear capability) is an issue upon which intelligence services still differ” (Clinton); “They are not nuclear-capable…How do you differentiate how far…they have gone…If their policy is to go to the threshold but not assemble a nuclear weapon, how do you tell that they have not assembled? So it becomes a serious verification question. And I don’t actually know how you would verify that” (Gates).

So there is once again no such thing as international law. It is enough that the USA (or actually Israel) perceives there is a threat in an Islamic Republic of Iran with any semblance of nuclear capacity and therefore the intelligence services will come up with “wonderful intelligence” as Colin Powell said of the British ten-year-old doctorate thesis copied and pasted from the Net about Saddam Hussein’s infamous and non-existent WMD which the USA itself has since admitted was wrong (when does the case go to a Court?)

The case has already been presented, for if the USA is postulating that there is no credible way to check what Iran has, then this creates a casus belli, in their warped and biased way of thinking.

Ladies and gentlemen, we have seen this movie before. Reading between the lines in this latest interview, we see ominous overtures. And notice that The Islamic Republic of Iran (the country’s name) was not referred to once. A case of total disrespect, preceding what?

*NBC Interview with US Secretary of State Hillary Clinton and US Defense Secretary Gates on Sunday April 11, 2010.