Kyrgyzstan Does Not Need Elections – They Have Coups Instead

The recent coup in Kyrgyzstan is not a color revolution. It was an emotional, brutal and uncontrollable upheaval organized by the masses, Sanobar Shermatova, an expert for Central Asia and the Caucasus told RIA Novosti at a recent news conference. 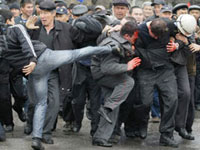 Kyrgyzstan Does Not Need Elections – They Have Coups Instead

“There won’t be a civil war in the country. There is no clear conflict and no dual power in the nation. We can now witness anarchy in Kyrgyzstan. Opposition had to claim responsibility for the future of the nation and take hold of the power in Kyrgyzstan. If they didn’t do it, external forces would interfere to establish their law and order,” the specialist said.

Arkady Dubnov, a political observer of the Vremya Novostei newspaper, agreed that there was no civil war threat in Kyrgyzstan, although there was another threat. Kyrgyzstan is the only state of Central Asia that has not established itself as a state. The government has no authority. The previous regime chaired by Askar Akayev lasted for 15 years, whereas Bakiyev’s regime could last five years. There is every reason to believe that the current regime will last for only several months. “People in Kyrgyzstan joke that they do not need any elections. They have coups every five years and the coups can replace all elections wonderfully,” the observer said ironically.

The two experts agreed that the current crisis in the former Soviet republic had a social nature. The people live in poverty, but the government continues to raise prices on electricity and gas.

“I’d also say that there is freedom of speech in Kyrgyzstan. The people of this small country learned that the financial assistance from Russia – about 150 million rubles assigned for the solution of social issues - had been spent inappropriately. Of course it could only raise anger and indignation with people,” Sanobar Shermatova said.

Making forecasts for the future development of Kyrgyzstan, the two experts agreed that the process to overcome the political crisis in the country will be a very long and difficult one.

Sanobar Shermatova said that that the presidential form of administration does not fit Kyrgyzstan much. The nation can hardly accept the parliamentary form either – the political parties in Kyrgyzstan are going through the very early stage of their development.

There are no political and economic programs and no discussions. There is no democracy in the Western perception of this word.

“The people of Kyrgyzstan are nomadic. They’ve never had any notables, they have never had homage for power. They had rich people, of course, but the rich in Kyrgyzstan have never been perceived as people of blue blood. I believe that the society always pushes up those who meet their requirements. The people of Kyrgyzstan will never choose a dictator. They are very active people, each and everyone of them think that they can take the position of the president, Shermatova said.