Kyrgyzstan One Step Away from Civil War

The Central Asian Republic of Kyrgyzstan has become the latest Republic to reject a colour revolution after President Kurmanbek Bakiev has been forced out of office in a popular uprising against his nepotism, corruption and disastrous social policies which stretched his people to breaking point. 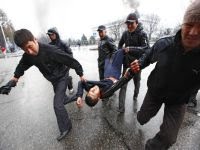 Kyrgyzstan One Step Away from Civil War

Bakiev came to power on a popular ticket in the 2005 “Tulip Revolution” which ousted President Askar Akaev from the White House (center of government) in Bishkek, capital of the Kyrgyz Republic, or Kyrgyzstan. However, his increased reliance on his fellow clan members from his power base in the south of the country, Jalalabad, and more seriously, his policy of nepotism, distributing positions of power among family and friends, while simultaneously raising prices of essential commodities in a country where 1.8 million (33%) of the population of 5.3 million live below the poverty line (a situation exacerbated after the voluntary dissolution of the USSR), gave rise to increasing hostility.

Start of protests against corruption and nepotism

The protests started in early March (beginning in Talas and soon reaching the capital) and came to a head this week after Government forces started repressing the demonstrators, followed by an escalation in violence and culminating in opening fire, killing at least 75 protestors and injuring around 1,000 according to data from the Health Ministry. The White House was invaded and crowds rampaged through its seven storeys, looting and setting it alight, as other Government offices were occupied.

“Justice and Democracy” were the words of the day as Roza Otunbaeva, former Foreign Minister under Bakiyev, whom she helped to power in 2005, seized the reigns of government, backed by the military forces, police and border guards.

Roza Otunbaeva contacted Moscow earlier this morning (Thursday), stating that she is in full control of the country, except for Bakiev’s heartland around Osh and Jalalabad, and is backed by the security forces. She said that the new interim government wishes to negotiate Bakiev’s resignation, because “his business here is over”.

Bakiev leaves a country in which the average wage is 130 USD per month. 40 per cent of the country’s income comes from remittances from Kyrgyz workers in Russia, a substantial part of the rest comes from the rent of US and Russian military bases and revenue from mining activities (mainly gold, mercury and uranium).

US base at Manas

Regarding the US military base at Manas, Otunbaeva has declared that it may continue operating but that there are certain questions that need to be solved. President Bakiev had declared on a visit to Moscow last year that he would close the US base, then after receiving 2 billion USD in aid packages from Russia, decided to do a U-turn on his promise, allowing the base to continue at an increased rent.

Russia was quick to recognise Roza Otunbaeva as the country’s new head of government after Bakiev fled and Prime Minister Daniyar Usenov resigned. Dmitry Peskov, the spokesperson of Prime Minister Vladimir Putin, has referred to her as “the head of government of national confidence”. Russia’s move towards restoring Moscow’s authority over its traditional sphere of influence in its own geo-political backyard continues to take important strides after the total failure of the Orange Revolution in Ukraine.

Kyrgyzstan’s new interim leader declared today that Bakiev is in his homeland trying to garner support, which would be a perfect remedy for a civil war as southern clans fought those in the center and north of the country. However he would gain nothing from this, since his clan has been ousted from power.

While Bakiev’s corrupt and amateurish brinkmanship irritated Moscow, it is clear that while Russia would welcome regime change in Bishkek, this revolution comes from within and is a direct result of mismanagement at a critical moment in the country’s socio-economic history.

The knock-on possibilities of unrest are therefore not only minimal, but non-existent. The mines will continue producing, because they have to, and the only possible outside player picking up a tab may be certain Kazakh banks which had over-exposed themselves to the Bakiev regime’s modus operandi.